According to Chinese lore, the “year” was a mythical beast who lived in the sea and would come to land to terrorize the land and people. Only through fire and the color red could the beast be scared away. So, why didn’t we try that with 2016?

For nearly one-sixth of the world this weekend, fireworks and auspicious red are coming out to keep the beast of the year at bay. From January 28th through February 2nd, the start of the Year of the Rooster will be celebrated through festivals, family reunions, and a long history of tradition. With consumer confidence on the rise after a year of ups and downs, spending is expected to peak during this holiday period. For the retail world that means gift giving and, yes, new outfits. In looking at just the Chinese market we can already get a feel for the effect on the assortment. We see dresses selling out at a higher rate than other categories in anticipation of the occasions ahead during this time followed closely by shoes.

On the gift giving side, red envelopes filled with crisp money are traditionally given as symbols of good luck and to ward away evil spirits (2017, you’re next). Yet, not all gifts come in monetary form. Many retailers have taken advantage of the holiday market to provide special collections to celebrate the holiday and make gifting easier. Take for instance Mac, Adidas, Apple, and Starbucks - all major players in the market that have released limited-edition pieces with red, gold, and Rooster motifs. Yet following tradition once again, there are do’s and don’t in Chinese culture about the gift given and the symbolism attached. If one were to stray away from the red envelope, what would that entail?

For starters, clocks and watches can mean “running-out-of-time” so that is a no-can-do for giving to someone you want to stick around. Umbrellas? Sounds like the Chinese word for “breaking up” so forget about giving that to your significant other. A mirror? Easily broken.
Shoes, then! Nope, you step on them and that is just not good taste. 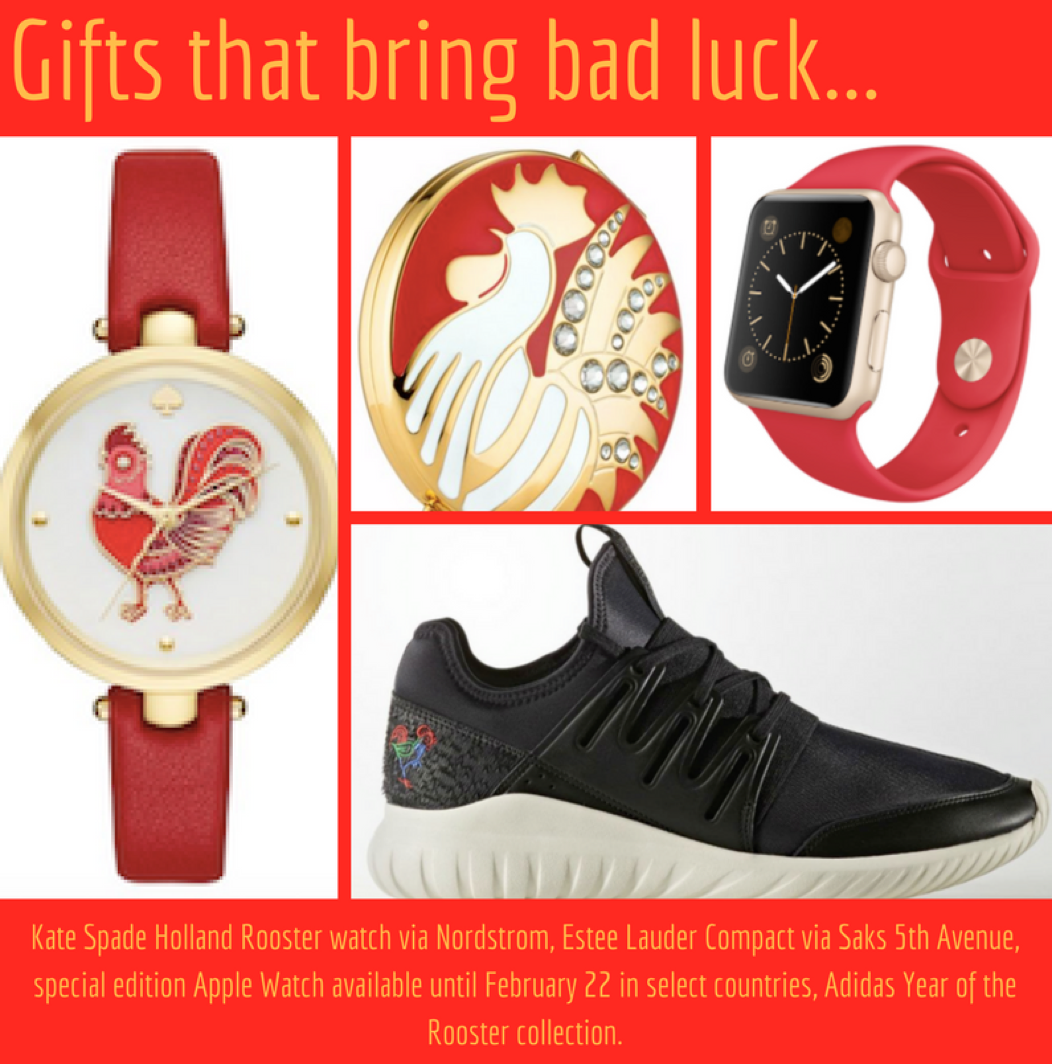 So, we’ve thought of some better ideas for gift options. You can get a handy Rooster shaped piggy bank to hold the traditional money given in red envelopes. Or, you can look at superstition again to guide you. Anything in a pair means harmony, so you can’t go wrong with earrings (or two lipsticks for the beauty junkies!).

Nevertheless, the coming weeks will be interesting to watch as the large influx of cash enters the market after receiving their red envelopes (for those who didn’t follow our advice above). On our end we will be monitoring the after effects of holiday generosity, not just in the Chinese market, but globally.

Still haven’t purchased your gifts yet? Hey, it is all about bucking the trends so why not get risky. Live dangerously and give that fancy new Apple Watch to someone special this Chinese New Year!