It is the day after Valentine’s day, and we are still longing for someone to look at us the same way Beyonce and Adele gazed at each other at the Grammy’s. Adele’s speech honoring Beyonce may have stolen the show, but their outfits were just as stunning as their musical performances. This award show devoted purely to musical talent, is the one night of the year where fashion boundaries get pushed, perhaps rivaled only by the equally eclectic Met Gala. It’s a time where artists get creative, so let’s take a deeper dive into what the two starring ladies of the night wore during their Performances, and what they were really trying to say.

We all know Beyonce is our version of American Royalty, but her gold ensemble designed by Peter Dundas proves that she truly is a goddess of our time. The vivid gold and ethereal headdress referenced the West African goddesses Oshun who represents sensuality, love, female and fertility. These themes were further emphasized when Beyonce opened the show with images of her mother and daughter, Blue Ivy - bringing the whole circle of life to the stage. One can’t also forget that this idea also appeared in Beyonce’s “Lemonade” album and also makes an appearance in her video for “Hold Up.” Gold for the (almost) win.

Looking at our other leading lady, Adele’s voice mirrors that which we can only imagine angels sound like. Her album “25” conveys her emotional journey into finding herself after motherhood, and her pared-down performance coupled with her elegant fashion statement made for a winning combination. Her Givenchy dress featured a classic feminine silhouette with a stark contrast of sequins and embellishments. The contrast was an edgier look than previous performance outfits and symbolized the emotional significance of finding herself post-motherhood. 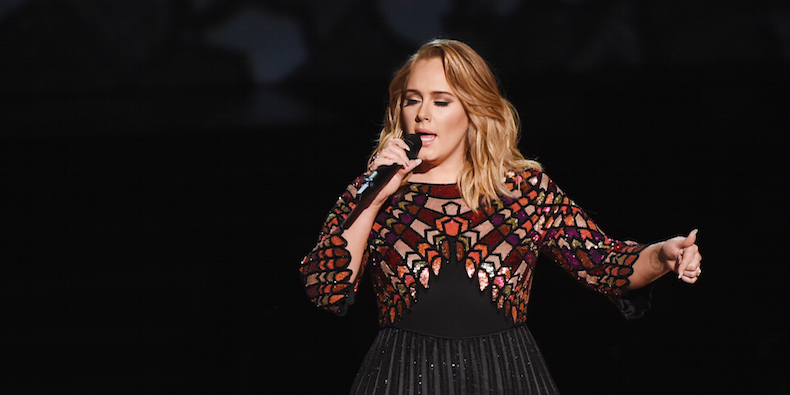 For both Adele and Beyonce, the theme of motherhood was apparent in both of these ladies acceptance speeches and their jaw-dropping performances. No matter what they wore, both women spoke, or more appropriately sang, to the strong female figure via their outfit choices.

Now I find myself asking...if I can’t sing like them, can I at least trade wardrobes with them for a day? If not, they will still forever remain all of our #goals.

Other posts by Larissa Guimaraes