New York City has it all, especially when it comes to fashion. From shopping, to street style, to even, yes, learning, you can do it all here. So if you’re looking to broaden your fashion knowledge, your first stop should be at one of the many museums - including the collection at the Fashion Institute of Technology. FIT’s costume exhibits are one of the most underrated fashion attractions in New York City. Not only do you get to see significant historical collections (and learn a bit, too) but you get up close and personal with the work of modern day legends - for free. From original Coco Chanel to Charles James to Alexander McQueen, taking a trip to the FIT campus in Chelsea is well worth it, and guess what - it’s free!

On view at the moment until November 18th is the exhibit “Force of Nature”. This exhibit shows the parallel of exploration into the natural world alongside the creativity of the fashion industry. Focusing on European womenswear from the 18th century to present day, this collection looks at the intricate connection between the natural world and fashion. As mankind discovered new lands, plants, and animals, new sources of inspiration came to be in clothing. From the plumage of exotic birds to the emulation of a flower’s petals, the relationship of clothing and nature became closer post-Eighteenth century in Western world.

What is particularly interesting about this exhibit is the opportunity to view works from iconic designers in a fresh perspective such as with the inclusion of pieces from Alexander McQueen or Charles James (both of which have been featured at Met Costume exhibitions in the past few years). Through highlighting the “force of nature”, FIT shows us how the physical construction of natural elements has influenced the construction of garments and has been a design element heavily utilized by fashion greats. Take for instance the Swan Dress from Charles James (far left below) modeled after the delicate folds of a swan’s wings or Thierry Mugler’s futuristic interpretation of a crustacean shell in the evening dress from the Les Atlantes collection. Another interesting example is the scalloped design on Jeanne Lanvin’s evening dress from the 1930’s styled after fish scales. Les Atlantes collection 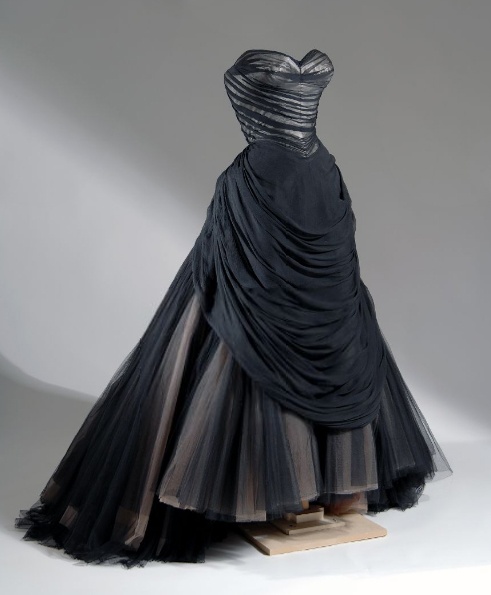 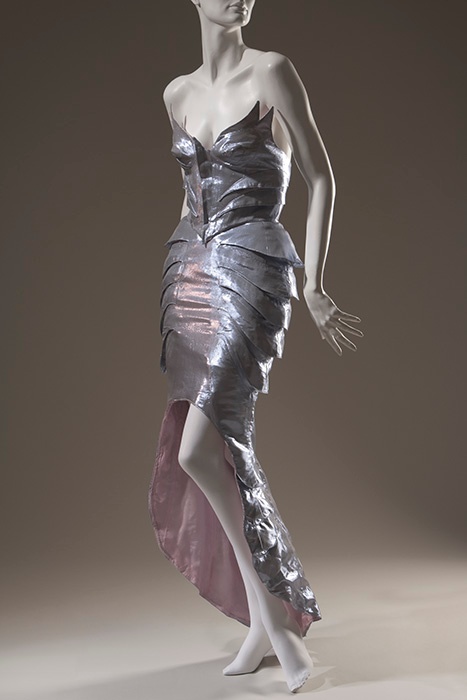 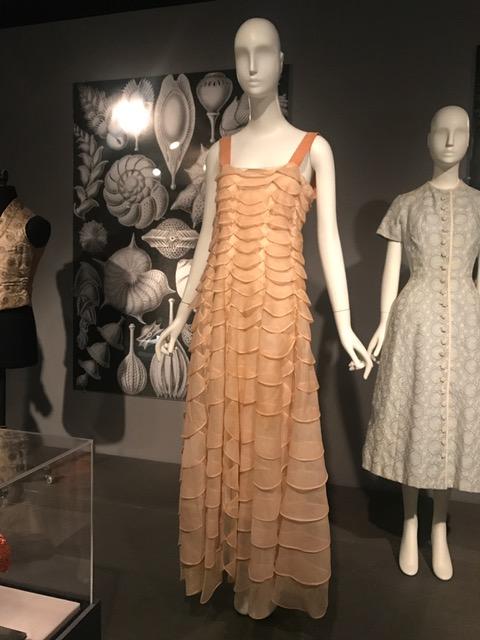 Another particular highlight from this exhibit is the use of technology in an unobtrusive but still complementary way. Separated into seven different content sections, FIT provides interactive iPads that allow the users to go in more depth into any of the themes such as “The Aviary” or “Science of Attraction”. In this sense, the museum can still tell a greater story without overwhelming the visitors just there “to browse”.

The penultimate message behind the “Force of Nature” exhibit brought us full circle to the current relationship of fashion and nature. After a period of fascination with the natural world during the 18th century, the industry began to consume resources (including bird feathers, furs, leathers) at an alarming rate. While stunning, we see this demonstrated in pieces from Bill Cunningham (feather cape from the 1960s, left image, far left), this Cristobal Balenciaga evening dress made of ostrich feathers (left image, far right from 1967), and this Valentino coat with Cheetah fur trim (right image, far left from 1974). While pieces of fashion history, we recognize now that to be inspired by nature does not always require the direct use of these resources. 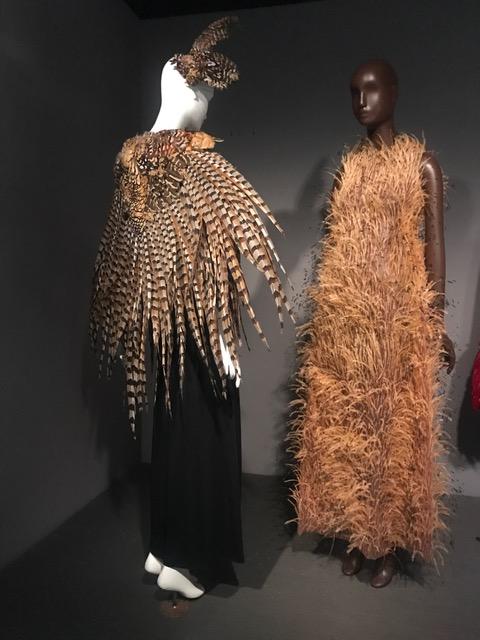 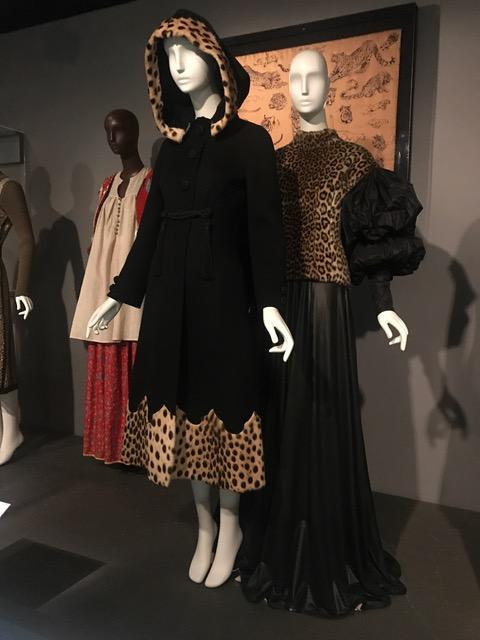 With the extinction of various animal species and production methods causing increased waste and pollution, fashion has had to rethink her relationship with Mother Nature to be more environmentally aware. Within the exhibit, FIT showcased a few pieces that demonstrated the use of biomimicry without the direct harm to the environment, including the Speedo Fastkin II Swimsuit (far left, below) modeled after sharkskin but made with polyester and lycra and the The Lost Explorer Black Magic Suit (far right, below) which imitates the water-wicking properties of a duck’s feathers but only using cotton and high-tech fabrics.

The challenge of this exhibit is providing a more optimistic or directional “what’s next?” for visitors. As one of the top fashion schools in the world, FIT is in a position to inspire and push forward a more sustainable agenda with the next generation of designers. Yet with only a few pieces to conclude the collection on a more innovative and optimistic note, we were left to our own imaginations to think of what comes next. It is possible though, that this open question is what will drive the next movements of change to preserve both the natural world and the fashion industry and allow them to coexist in a harmonious relationship.

Force of Nature is open from May 30 - November 18th at the Museum of FIT located at 7th Avenue and 27th Street in New York, New York. More information can be found here.