Highlights:
-Luxury discounting remains high, with discounts most likely in apparel, but least likely in handbags and sneakers.

-Amount of goods on sale in active and sportswear decreased from the last week in the US.

-In active and sportswear, sneakers were most likely to be discounted and had the highest discounts.

-Discounting has continued to increase amongst US specialty retailers.

-Staying in goods, like robes and pajama pants were least likely to be discounted.

This week we're examining not only the macro movements of the luxury sector, but what's happening at the category level. Let's take a closer look. 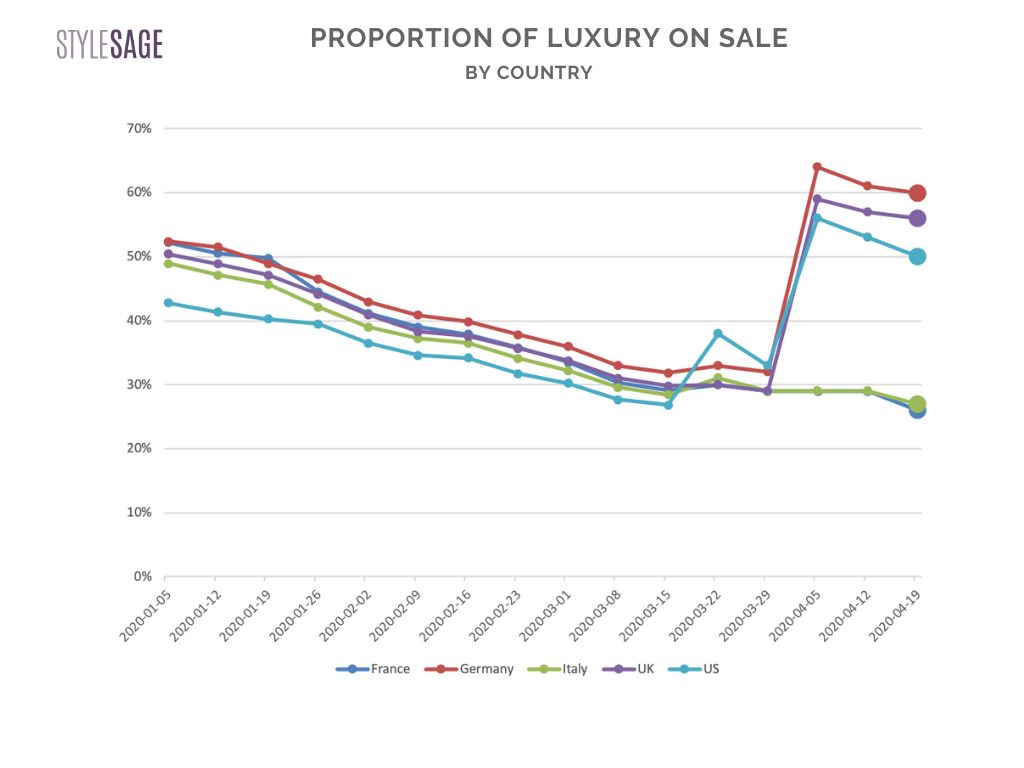 This past week saw slight decreases in the proportion of items on sale at luxury retailers. The same trend was present in average discounts, which trended down by 1-2 percentage points across geographies (not shown). 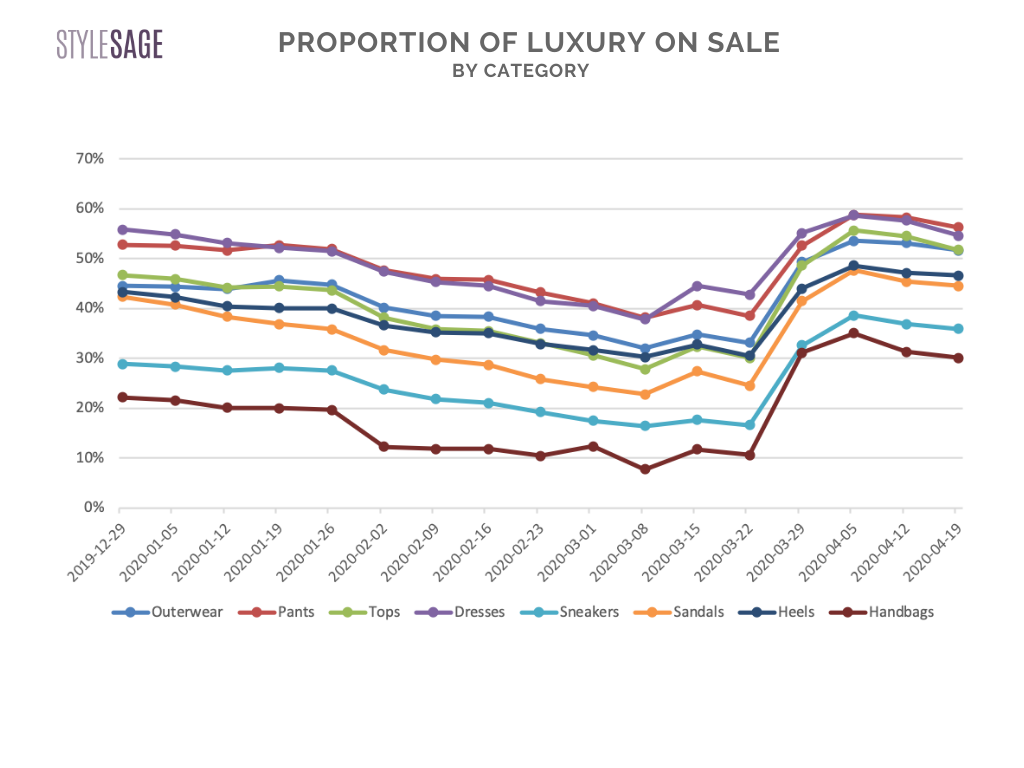 Moving onto what was happening at the category level, we see some notable themes emerge. The first was that the categories most likely to be marked down (highest discount penetration) were pants, dresses, tops, and outerwear. Each of these had more than 50% of products marked down. What's also worth noting here is what was least likely to be discounted, and that included handbags (30%) and sneakers (36%). 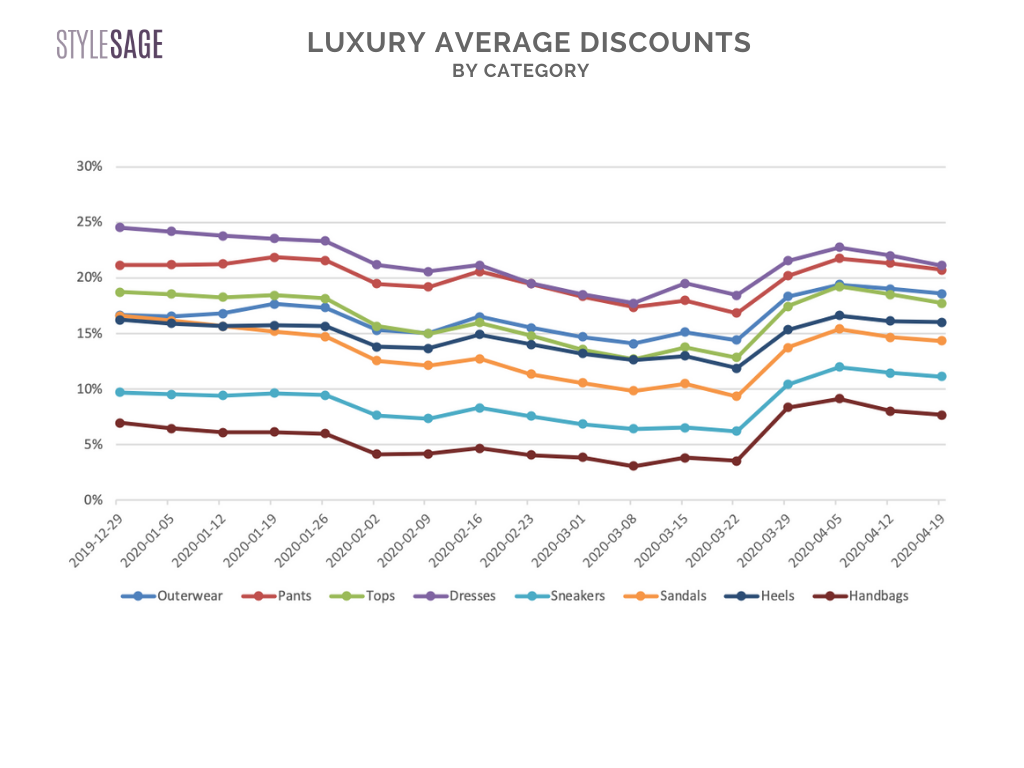 Lastly, we examined how high those average discounts were, and our analysis showed a similar trend to what was (and wasn't) marked down. The same four categories (dresses, pants, outerwear, and tops) that were most likely to be marked down also had the highest average discounts. Likewise, sneakers and handbags also had the lowest discounts. These two categories are proving to be more resistant to discounts than most in the luxury sector, and it's for that reason theses two categories should be noted as bellwethers to the state of the luxury sector.

Have you found your favorite virtual workout session yet? As we all attempt to keep ourselves active, let's also track the latest movements of the active and sportswear market. 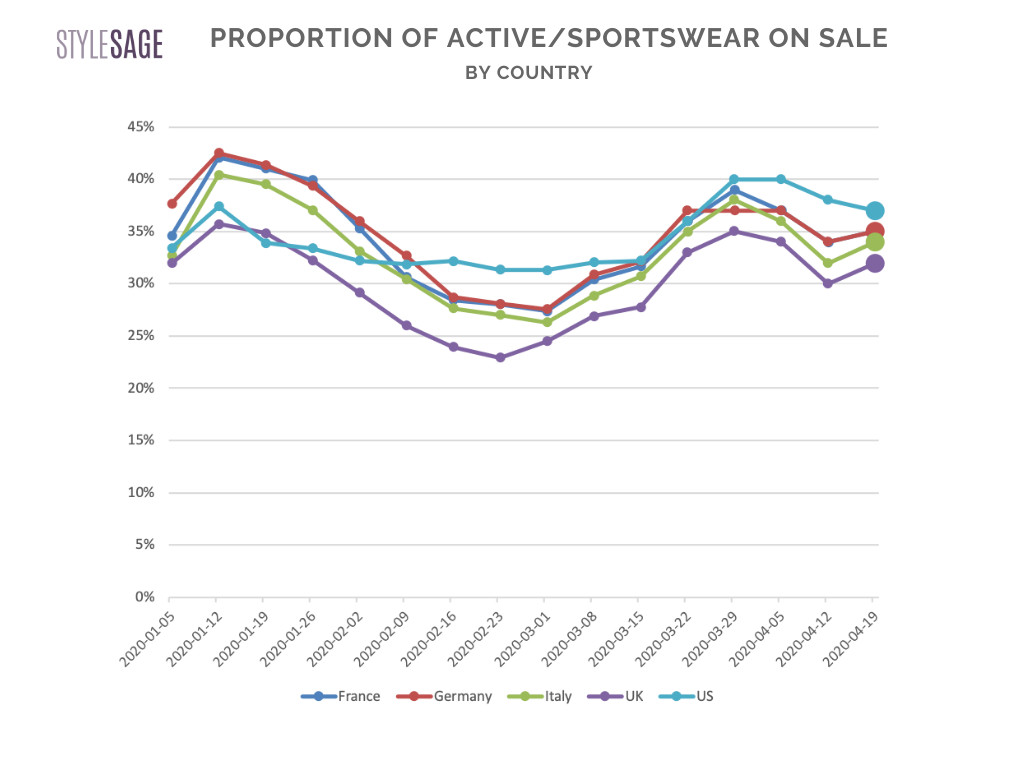 There's been a little bit of movement in the market this week as amount of assortment on sale has gone up a few percentage points in Germany, Italy, France, and the UK. On the other hand, discount penetration for active and sportswear has gone down in the US, but it's worth noting that the US still has the highest proportion of goods on sale compared to other countries. Average discounts have remained stable from previous weeks (not shown). 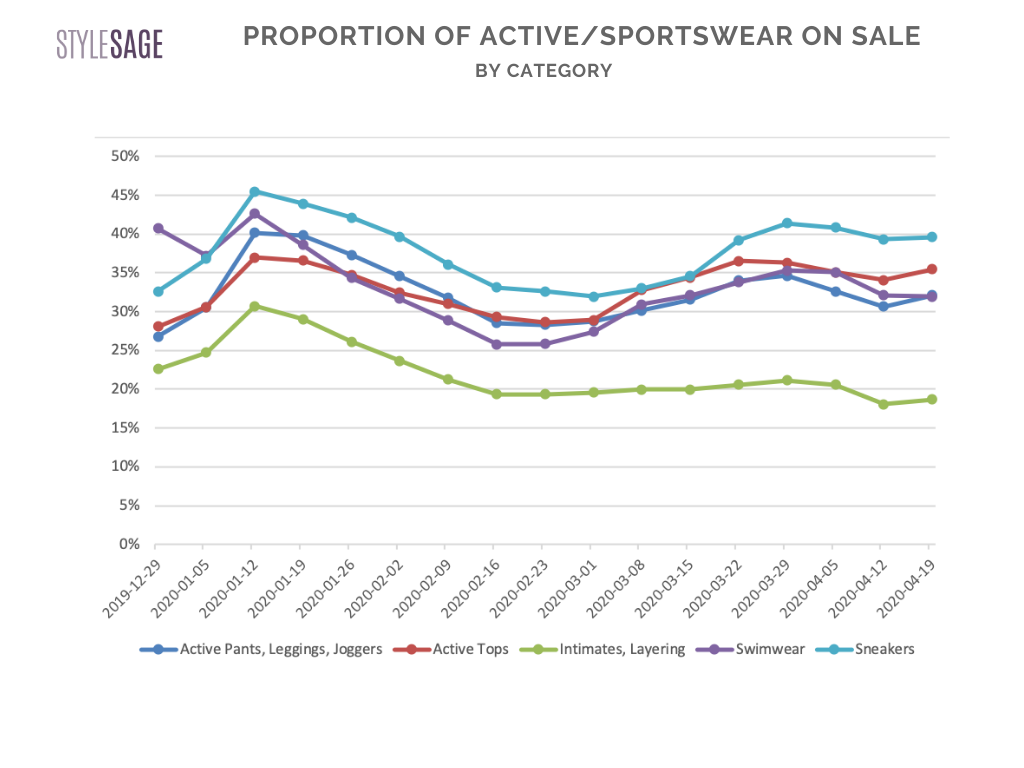 As with luxury, we wanted to see what was happening at the category level. Here we spotted an interesting trend. Where in the luxury sector, sneakers were one of the categories with the lowest likelihood of discounting, in the more mainstream price points of the active and sportswear space, they were the category most likely to be discounted. Active tops, pants, and swimwear were not far behind sneakers. Base layers like sports bras were amongst the products least likely to be marked down. 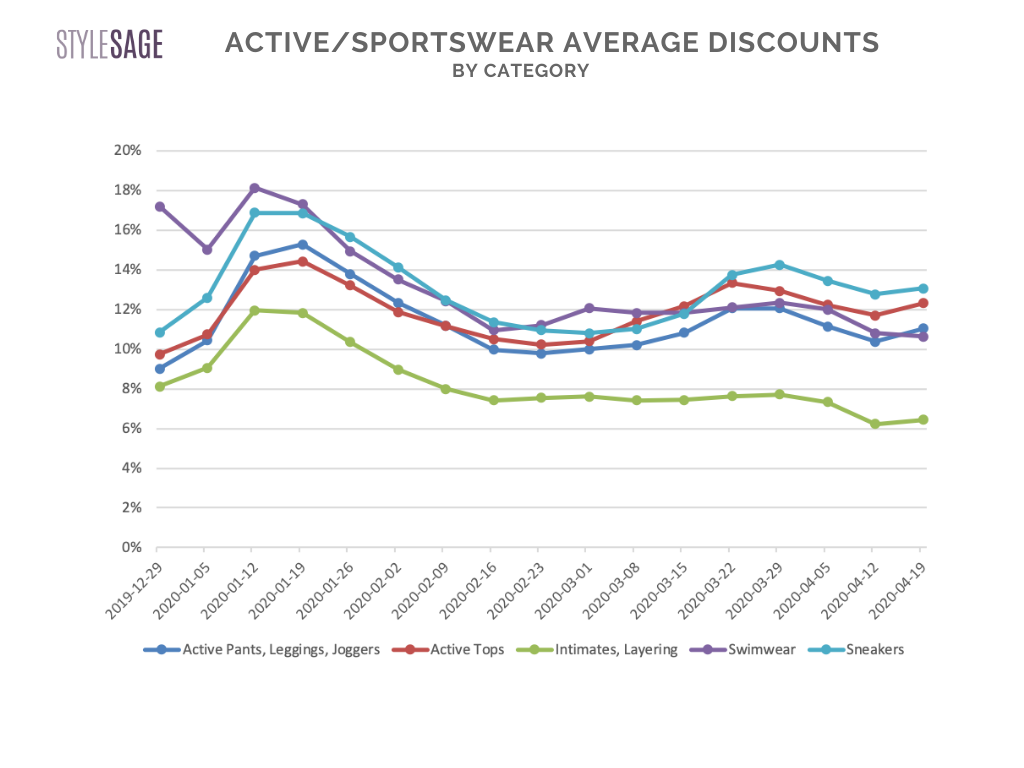 We also wanted to see which categories have the highest average discounts. Unsurprisingly, the categories with the highest discounts were the same as those most likely to be marked down.

Over the past weeks we've seen the proportion of goods on sale in the US specialty sector averaging around the 50% mark, with average discounts clocking in around 20%. Let's see if this has shifted significantly from the previous week. 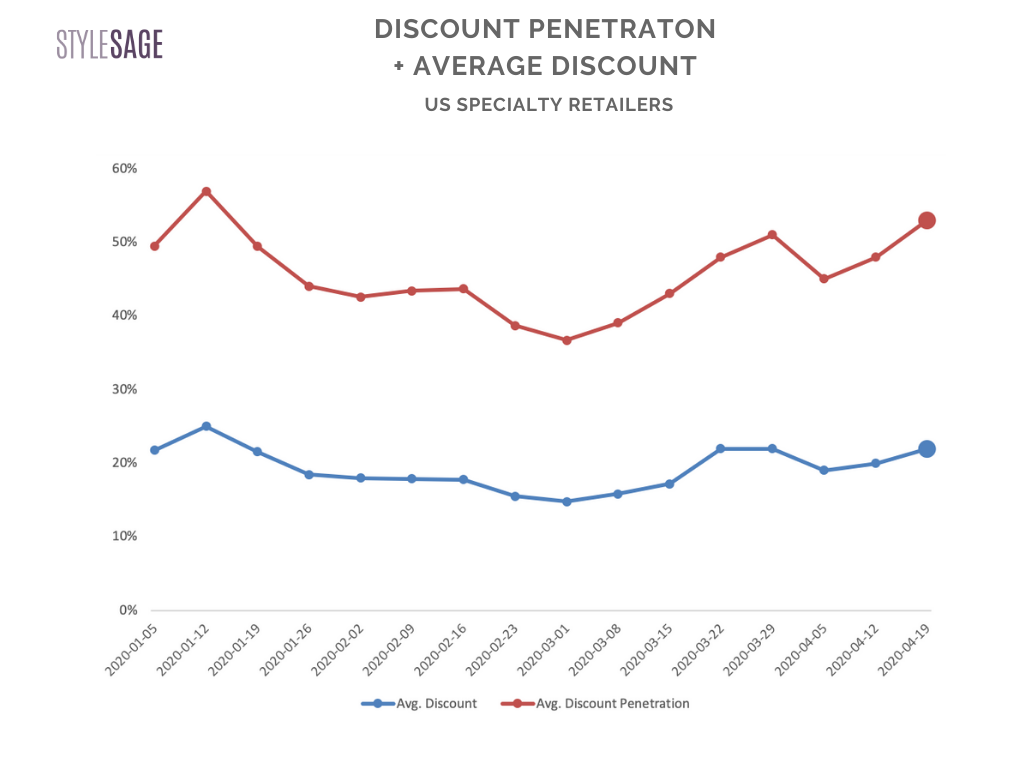 This past week saw both discount penetration and average discounts creep upwards, landing at 53% and 22%, respectively. 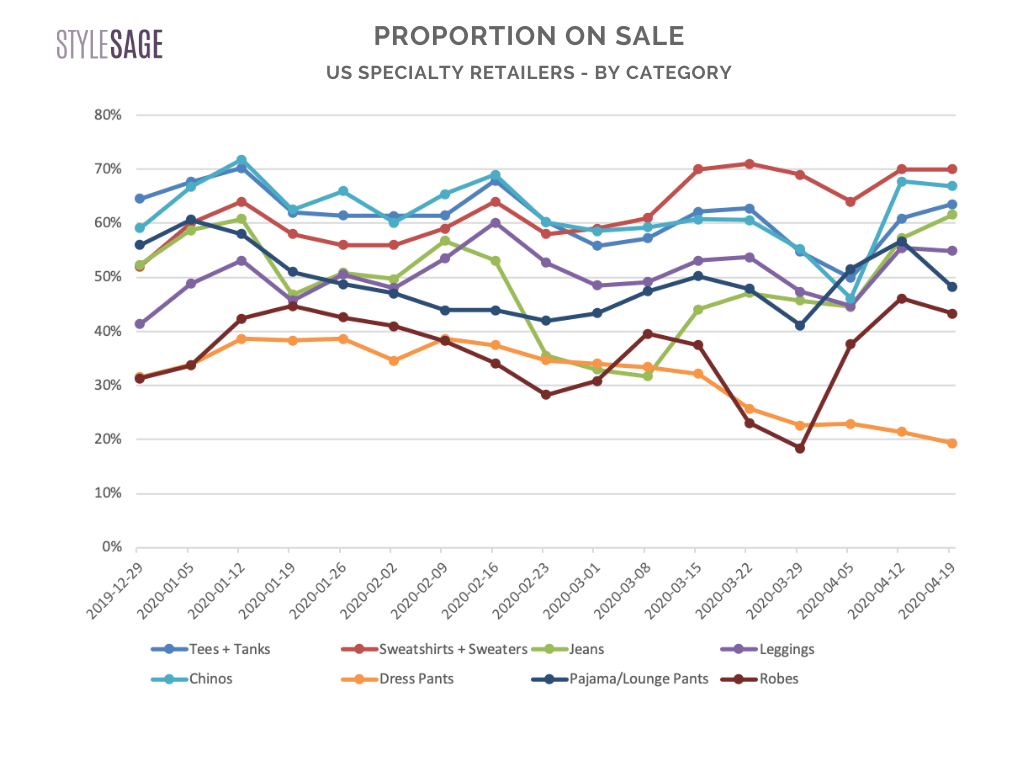 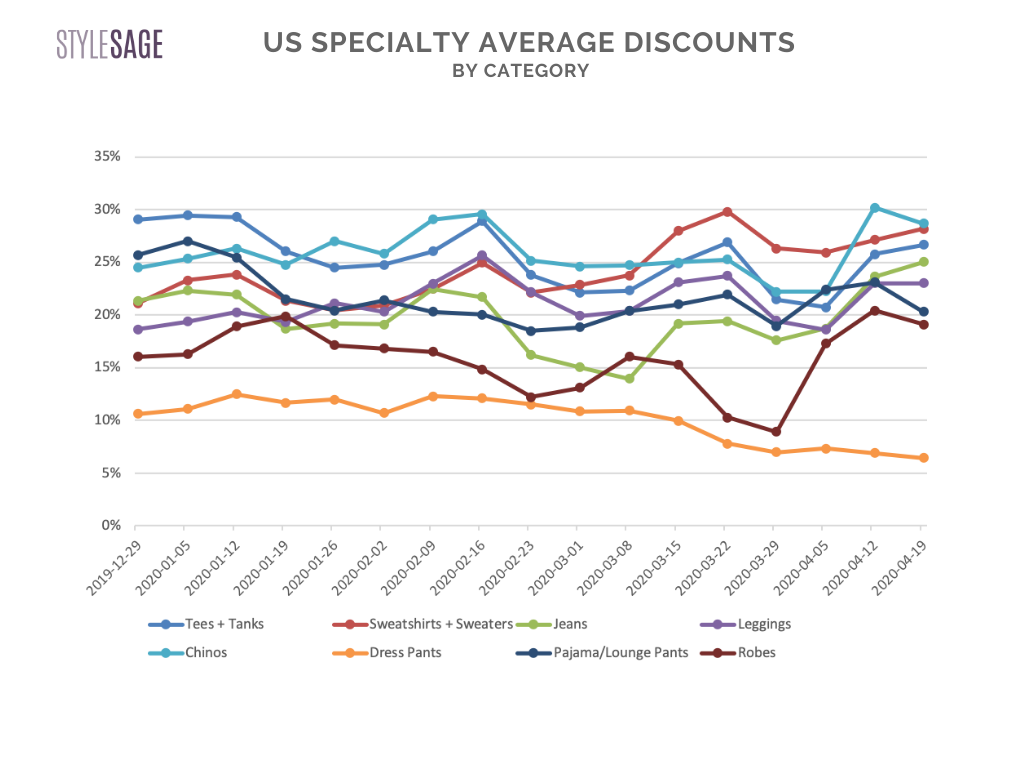 And last but not least, we saw that chinos, sweaters, sweatshirts, tees, and jeans had the highest average discounts. The lowest? Yep, it was dress pants, robes, and those trusty pajama pants.

Which categories are you closely tracking? Email us here to learn more about what's happening in your specific corner of the market!