There are differing opinions on wearing jeans when it comes to summertime. Some of you have already broken into a sweat at the thought of sporting them during the upcoming months, while others will refuse to put their year-round staple away simply because it’s a furnace outside. To each their own, and of course, there’s always denim shorts. Without a doubt, however, denim in its various shapes and formats, features heavily in people’s wardrobes, regardless of season or occasion. A recent survey by Invista, a leading manufacturer of cutting-edge denim fabrics, captured that the average American woman has 8.5 pairs of denim in her closet (in China that’s 6.4 and in Brazil, 9.5), and 80% think that jeans are appropriate to go from day-to-night. Our closets and the latest category data tend to agree.

But what happens to the denim market during the sweaty months? Does it go into hibernation or is it still alive and well at the point-of-sale? And how have profiles and materials changed over the past few months as we’ve transitioned into the summer season? We examined 16,000 denim SKUs, from value to premium, and we most definitely have some answers for you.

So to start, we’re seeing bootcut go the way of the discount rack, with slowing introductions, higher discount levels, and sell-through tapering off. On the other hand (leg?), cropped styles are picking up steam in retailers’ assortments, firmly in second place behind those eternally-popular skinnies. It’s clear those few extra inches of leg exposure go a long way in making consumers feel cool, you know, as people (and temperature-wise too). 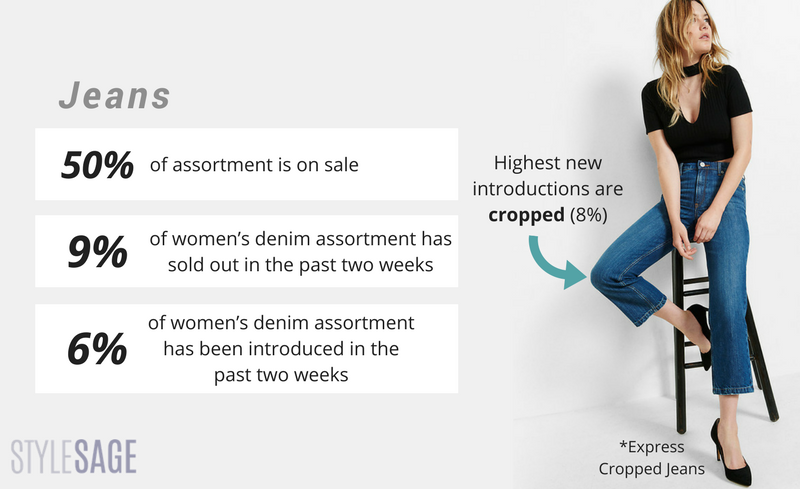 White Denim: Love It Or Hate It?

Just don’t spill on it. It’s officially okay to start wearing them in about one week, but are they still on trend? Well the word on the street is, your white denim is in the clear. In fact, when we scanned the market, we saw that white denim introduction is up four percentage points from one year ago, and 15% of all jeans SKUs on the market today are white. And in case you were wondering, you’ve got 111 days to maximize those pre-Labor Day white denim sales. 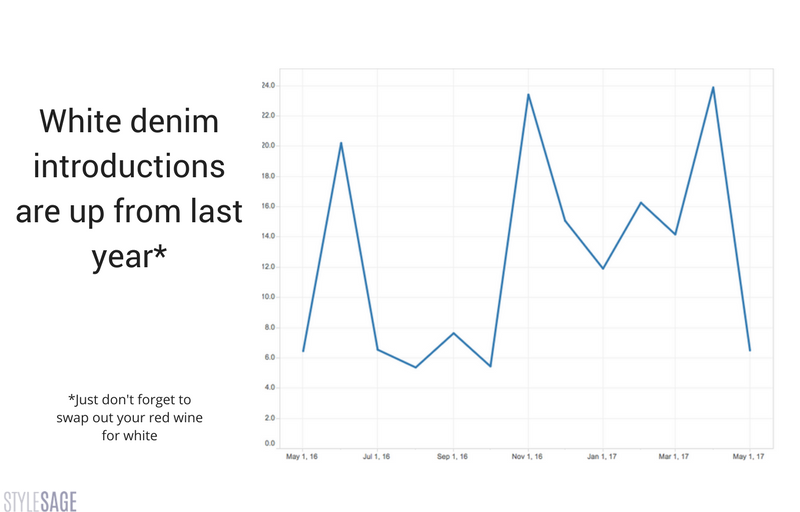 You’ve Been Cut Off

You may not be as lucky as us to have a no-dress code kind of office, but nonetheless, denim shorts are the axis around which many a summer wardrobe revolves. As retailers gear up for summer, we’re seeing the average current price check in at $64. Another way to look at it is that there is an average $48 price differential when you hack off those legs. But mob references aside, shorts are ready to take off for the summer. Sell-out rates are now at 6% and our historic data tells us this will climb higher over the course of the next 4 months. In the meantime, retailers are holding back on the heavy discounts, with only one-third of shorts assortments on sale (versus half of the jeans assortment). 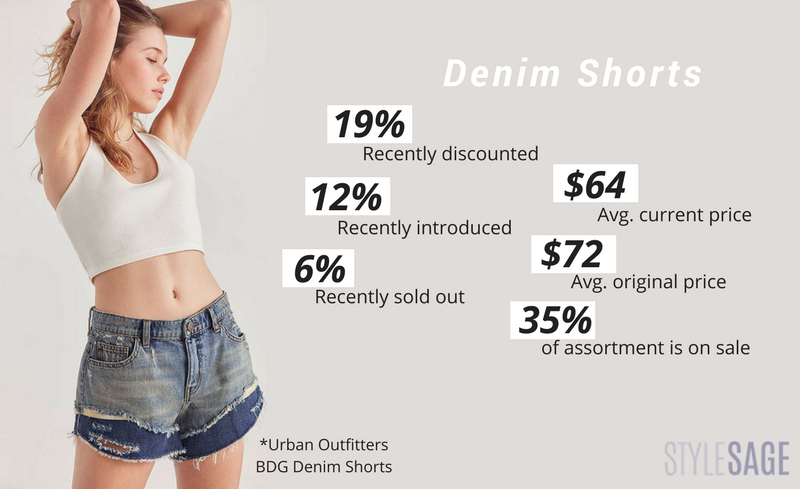 D-I-Y culture is alive and well this summer, and brands have definitely perked up to the opportunity to boost sales in the denim category with bedazzled and embroidered styles. With brands ranging from Gucci to Topshop getting crafty, what does this mean? Well, it allows for a higher price point, to start. The average embellished pair of jeans is $126, while the non-embellished pair averages $112. And what’s more, we’re seeing retailers combine the cropped and embroidered trend in many of their offerings. But retailers ought to move quickly; we’ve seen 14% of the total embroidered assortment drop within the last two weeks, and at this rapid rate of introduction, there could quickly be an over-supply of this season’s biggest denim trend.

If you thought that denim comes in only stretch or non-stretch versions, boy, do we have news for you. Last week’s Kingpins denim show in New York highlighted some of the latest and greatest advances in denim fibres, which were grounded in substantial research around consumers’ pain points in shopping in the denim category. Whether it was temperature controlling fabrics (reversing that summer discomfort issue we mentioned previously), or fabric that holds its shape for longer, consumers will soon be able to benefit from denim that is (nearly) as smart as they are. In fact, we wrote earlier in the year about how denim and activewear are taking cues in material and cuts from each other, and it’s worth a read.

Four Stats on the Activewear Business

What Are Shoppers Searching For? We've Got Answers

A Uniqlo Case Study: Delivering Best-in-Class Basics for the Masses

Zara Enters a New Category: The State of Intimates