Fashion circularity and sustainability are terms that often get confused. While they overlap, they are not one and the same. Circularity is the idea that there's no waste in the fashion supply chain, from design to care to recycling and over and over again. It's a closed loop where resources retain their value, versus the current linear one, where after usage, resources are disposed of and thus lose their value. Sustainability overlaps with circularity in the sense of minimizing waste in the supply chain, "while sustainability is more broadly related to people, the planet and the economy."

The Ellen MacArthur Foundation was launched in 2010 with the mission of "accelerating the conversion to a circular economy," and is the thought leader working across industries and geographies to push this circularity agenda forward. In the Foundation's "New Textiles Economy" report, it outlines the four focus areas for achieving circularity:

While simplified in the list above, there's obviously complex processes and ingrained human behaviors to untangle, in order to move the needle towards a more circular fashion economy.

Today, we want to shed light on each of these key themes, highlighting key players and progress along the way.

But first, the data

A recent article from Vox highlighted one of the key challenges in improving the fashion industry's practices, and that is there's very little data in the fashion space that's been scientifically sourced and validated. The article's author, Alden Wicker, cites wide margins of error on crucial data points like: how many garments are produced annually, what percentage end up in landfills, and how much green house gas emissions is due to the fashion industry, as just a few examples of the lack of good data.

We know we've got an industry problem here, but the question is how bad? Knowing where we stand currently, and marking our progress along that journey, can only be informed with the right data. In the "New Textiles Economy" research, the MacArthur Foundation says the same, "To guide the transformation towards, and to evolve the vision of, a new textiles economy, a robust evidence base is needed to create transparency on the impacts of the system and to aid stakeholders in defining actions required to change the system. While this report...aims to provide initial answers, more research is required."

The challenge? This type of wide-scale research is expensive and takes time to collect. But there's no other choice, as Maxine Bédat, founder of The New Standard Institute, reminds us, "If we don’t invest as an industry in this process, any company can say anything and we can’t say whether it’s meaningful.”

Getting rid of the bad stuff

On that note, let's transition to science and what we do know to be damaging to the environment.

According to experts, hazardous materials in apparel come from a myriad of sources such as dyes, chemicals used for sizing and fire retardation, and the metals used in clasps, zippers and other accents. And if we can get rid of these nasties earlier in the production process, that way we don't have to clean up the water and pollution byproducts. Brands making the effort to remove pollutants from the supply chain include Levi's, who's partnered up with Hohenstein, a testing and certification agency, on "Eco Passport by Oeko-Tex." According to Sourcing Journal, "It's is an independent certification system for chemicals in the apparel, textile and leather industries. It analyzes whether each ingredient in a chemical product meets international statutory requirements and is not harmful to human health." And it's open source, so that other companies can leverage the information and science to inform their decisions around materials, acknowledging that when it comes to circularity, one thing's for sure, collaboration is going to be key to achieving success.

In other, "The more you know," did you know that when you wash synthetic materials, it releases microfibers that are bad for our water supplies? Chelsea Rocher, researcher at the University of Toronto, explains it as such, "We find these tiny fibers in samples from headwater streams, rivers, soils, lakes, sediments, ocean water, the deep-sea, wildlife, arctic sea ice, seafood, drinking water and table salt. In our own samples our research lab sometimes find more than 100 microfibers in an individual fish. Such widespread exposure raises concerns about effects to wildlife and human health."

While solutions to the microfiber release problem are still in their early stages, there are some newish products on the market worth noting to help reduce the amount of those microfibers going into the water supply. One company called Guppyfriend has created a bag you can wash your synthetics in, which captures those microfibers with each wash. The company has designated all profits go to education and research efforts around micro plastics.

The more you wear

Many of us, small closets or not, are guilty of tiring of a piece of clothing and then quickly (re)tiring it. The chart below from the Ellen MacArthur Foundation shows just how much clothing utilization has decreased over a fifteen-year time period, while simultaneously clothing production has increased. (Clothing utilization is the number of times a piece of clothing is worn before being it's taken out of commission, so to speak.) 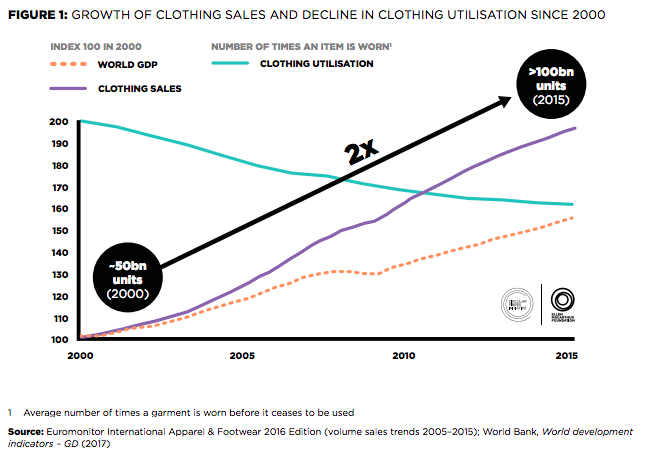 There's a couple ways we can all work to solve this piece of the circularity puzzle, one of which is buying clothing that lasts. At times that may cost more, but average cost per wear when calculated over a longer lifespan will then decrease.

Another way that brands are becoming part of this solution is by way of repair services. We're all quite familiar with both rental and resale at this point, but what about repair? Did you know that Patagonia, a leader in many fronts when it comes to circularity and sustainability, has a program called "Worn Wear," through which customers can send in their pre-loved Patagonia gear for store credit, which in turn gets repaired and then resold in its marketplace? The idea behind this is, of course, the longer the garment is worn, the less its environmental impact. And it's a system that can only work if durability is factored into the design process from the very get-go.

There's the recycling of stuff that we can do as individuals, and then there's fiber level recycling that requires serious science, and yes, investment, to increase fashion circularity. Both of these, are undoubtedly important.

By now, many of us have seen clothing recycling bins at some of our favorite stores, and as consumers, taking the step of making sure that clothing doesn't just go directly to the landfill is an important one. Even still, data says that less than 1% of materials within the $1.9 trillion global fashion industry are recycled.

Enter EON, a fashion tech company who envisions that we could one day trace the entire lifecycle of a garment by way of microchips. Their initiative, called Connect Fashion Global Initiative, is meant to "help recycling companies understand what a fabric is made of, to allow brands to refurbish old garments and secondhand marketplaces authenticate luxury goods." Their standard, called CircularID, would be facilitated by companies putting microscopic chips into pieces so that origins and lifespan of garments can finally be concretely traced. Pretty incredible technology and perhaps not as far off as we think, as companies like PVH and Target have signed on to the initiative.

And if you want to geek out on some next-level recycling innovation that's going on, this week a new partnership was announced between two companies you probably haven't heard of, Carbios and Novozymes, to take fiber recycling, specifically the PET stuff like plastic bottles and other plastic packaging, to new frontiers. The two companies hope to use the science behind enzymes to break down and make reusable, materials that couldn't previously be completed recycled. Consider our minds blown.

With advancements in recycling like the one mentioned above, there's a whole new world of textiles emerging. But you needn't look any further than the fruit aisle of the grocery store to see the origins of new and innovative fibers. A few that CB Insights highlighted in its recent report are Piñatex and Orange Fiber. Piñatex is a material from the leaves of pineapples that creates a wholly biodegradable mesh material, while Orange Fiber takes the rinds of oranges and turns them into a silky material.

If there's one thing that excites about the fashion industry is that its increasing convergence with areas of science and research mean we're all going to be getting much smarter about our fashion decisions from idea to point-of-sale.

If you're interested in learning more about the exciting technology companies and retailers powering circularity and sustainability in the new fashion economy, you won't want to miss CB Insights report on the sector here.

How Retailers and Brands Can Prepare for an Economic Downturn