Okay, yes, we get it. Jeans are still in. Athleisure is in. And somehow they are both living in harmonious marital bliss. It turns out that customer that wears athletic gear to work also owns jeans and wears them, too (startup life, amirite?). But it is important to understand denim in the context of its history as well as the retail world in which we are currently shopping. Where has denim come from and where is it going? But more importantly, what is happening right now in the industry between denim and athleisure? As it turns out, they may be influencing each other more than we thought.

Looking at the history of denim, jeans came to be out of necessity and not out of trend. As most garments go, the development of the jean is rooted in a workman’s (and workwoman’s) history. Denim became the durable, multi-purpose staple of the farm-hand, factory worker, and cattle rancher of nineteenth century America that didn’t need to be tailored to the body and could hold up in rougher conditions. Using techniques from the construction of saddlery and horse-blanket, jeans were made cheaply and with little maintenance. With no fuss and new technology, the jean was born – and worked in.

It wasn’t until Hollywood picked up the ruggedness of the jean that they became sexy as opposed to purely practical. Who didn’t want to imagine James Dean in his Lee’s? Denim worked its way into fashion as a trend. Soon the likes of Brooke Shields in her Calvin’s and Justin and Britney in their pop-star couple ensemble solidified denim as a statement of the fashionable.

Activewear entered the market in much the same way. A more active and casual lifestyle required clothing that transitioned from work to play and could keep up with the range of movement and comfort the wearer expected. Slim silhouettes and an abundance of spandex became hallmarks of athleisure. As a result, comparisons between the traditional jean and the activewear bottom, particularly the legging, arose as they both began to compete for closet space. For many, it is believed that the two garments are still fighting for market-share with denim losing more and more of a hold. But if anything, it appears that activewear is influencing denim and helping it evolve into a more functional and timely piece.

Take for instance the number of products introduced into the market since the end of December. 74% more jeans than leggings are coming in as new products across some of the top retailers. 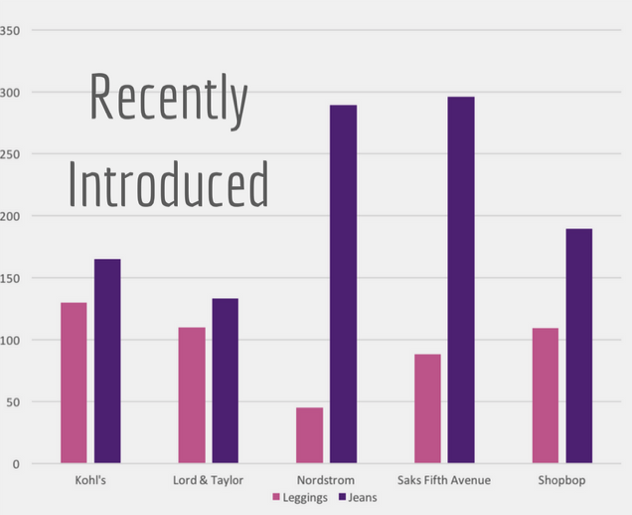 In terms of women’s denim styles, skinny and stretch jeans, the silhouette most similar to the activewear legging, accounted for 53% of total sold-out products. 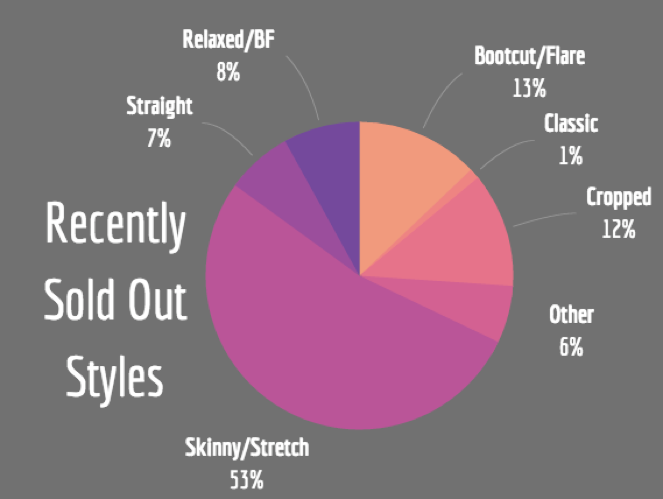 Looking further into the garment itself, 71% of the denim in the market during Q4 has some component of spandex. The top four material combinations all included spandex, which accounted for 51% of the total assortment. 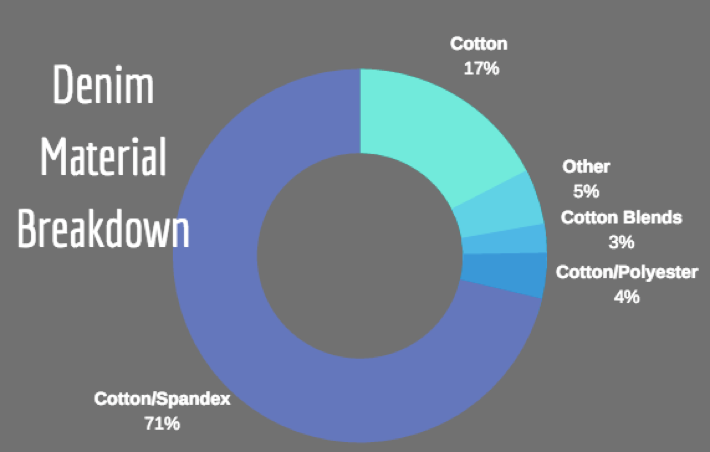 Looking at these numbers, it appears that slim, skinny silhouettes with plenty of spandex are saturating the market. This sounds like we could be talking about a pair of jeans or a pair of leggings. Instead of one taking market share over the other, denim has instead been influenced by athleisure – adopting the characteristics of leggings that have made the garment so relevant to today’s consumer. The masses are speaking and they want it all – denim with the functionality of leggings.

How are we seeing that from brand to brand? Take denim heavy-hitter Levi’s whose classic 501 line helped launch the company in the 19th century. This past Fall they added stretch to mix for the first time in 143 years - all in the name of innovation. Another company keeping up with the changing denim landscape is Hollister, who added a range of denim made with performance fibers. By adding Invista’s Coolmax All Season technology and Lycra spandex to their assortment, they are able to meet the “needs of the customer’s on-the-go lifestyle” according to brand president Kristen Scott. 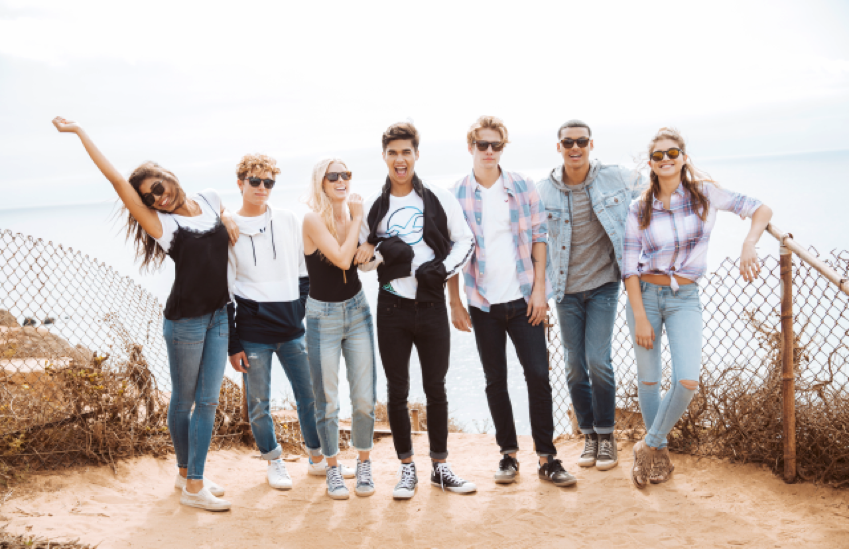 In looking at the history of denim in the context of the new powerhouse of activewear, it doesn’t appear that the category is falling out of favor. Instead, we see denim learning from her legging sister and becoming a better, smarter version of herself. Brands are going back to the technology drawing board to make this happen. What once meant saddlery methods and new sewing techniques, now means performance fibers and accounting for movement and flexibility, all for the sake of function.

So as I sit here in my stretchy skinny jeans I say thank you, activewear, for making jeans a working woman’s piece again - even if it is just at my computer.