Okay, I’m a bit of a nerd, even when it comes to fashion. So, when I look at Paris Fashion Week I cannot help but think of the rich fashion history that is represented on today’s catwalk. Lucky for me, New York City has a plethora of resources to dig deeper into this history - including the Museum of the Fashion Institute of Technology. One exhibit currently on display is “Paris Refashioned: 1957-1968” that takes a closer look at the relationship between popular culture and the changing haute couture landscape in the fashion capital of the world. Inspired by Paris, I took a fieldtrip to FIT to see if the the designers at PFW paid attention during their Fashion History Class.

Fashion hit an interesting stride in the late 1950’s. Europe was finally recovering from World War II both physically and financially. Going into the Sixties, more materials and fabric were available to fashion houses and consumers now had access to more disposable income. Additionally, women were exercising new freedoms post War by pushing boundaries and raising hemlines. With the increase of money entering the market, a consumerist society was born that rivaled the fashion of the legendary Couturiers of Paris that were still standing after the War. As a result, the period between 1957-1968 was a pivotal time for modern fashion that has shaped the identity and aesthetic that we see in design today.

At FIT, this fashion era comes to life through a curated collection of garments that range from the relatively unremarkable (tweed suit sets) to the remarkable (feathered cocktail dresses). Yet in the context of the cultural shifts of this time period, the exhibition shows that the sartorial significance is not lost. Just to see how important this time was for fashion, I compared some of the key styles and designers from the most recent Paris Fashion Week to some of the featured garments at FIT - and yes, it does look like a few did get an “A” in Fashion History. 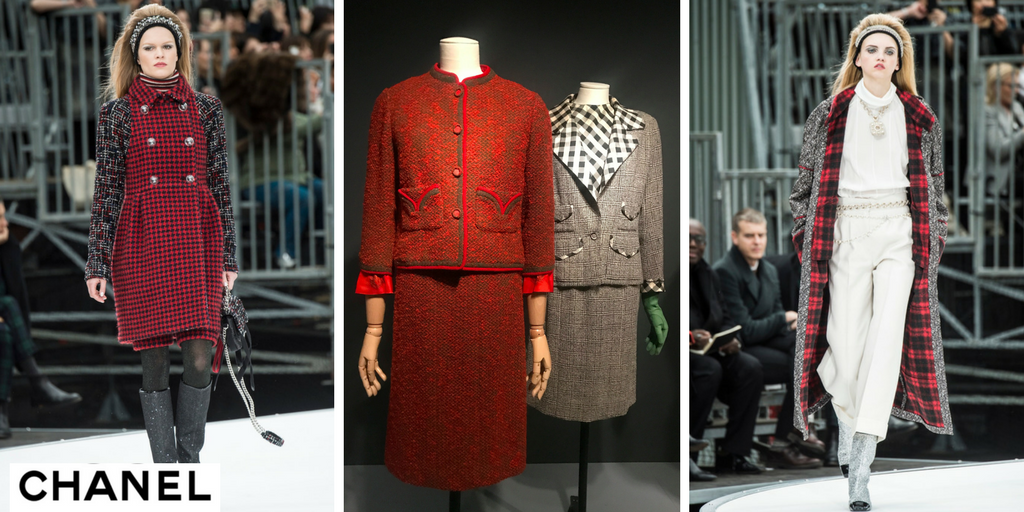 Chanel was already a renowned name in design, but after closing her doors during World War II she came back into the Fifties during the time of Dior’s feminine New Look. Her goal: design for the modern woman without fuss or frills. Karl Lagerfeld for Chanel in 2017 seems to be taking the same approach, quoting the graphic black, white, and red check reminiscent of Chanel’s 1959 tweed suits (center) and making style effortlessly achievable. 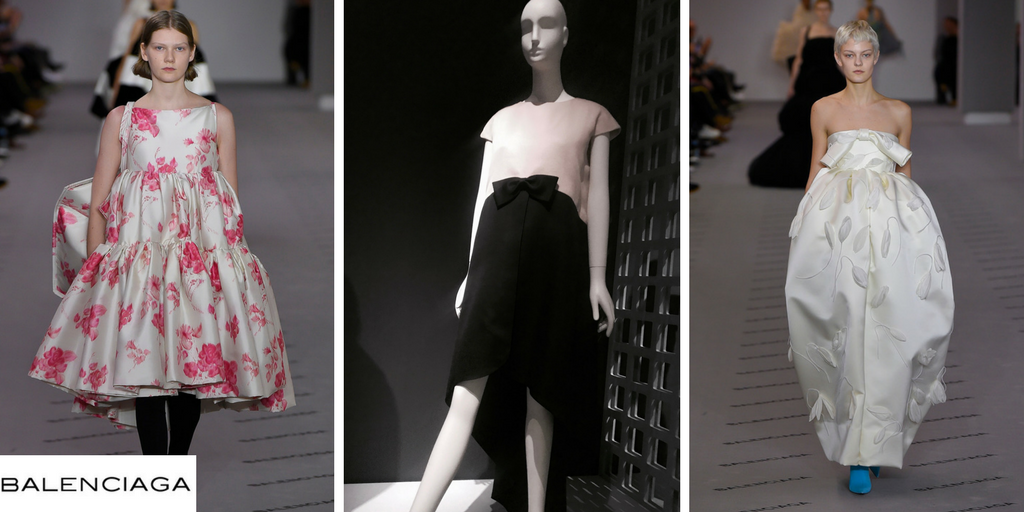 Though born in Spain, Cristobal Balenciaga was another Parisian-based designer that was well established by the time of consumerist shifts of the 1960’s. His designs balanced intricity with architecture never seen before in the fashion community. The latest Autumn 2017 collection still mimics the empire waist, bubble hems, and feminine details introduced by the designer. The evening gown from 1968, featured center, was created just before his retirement and epitomizes the refined design native to the house. 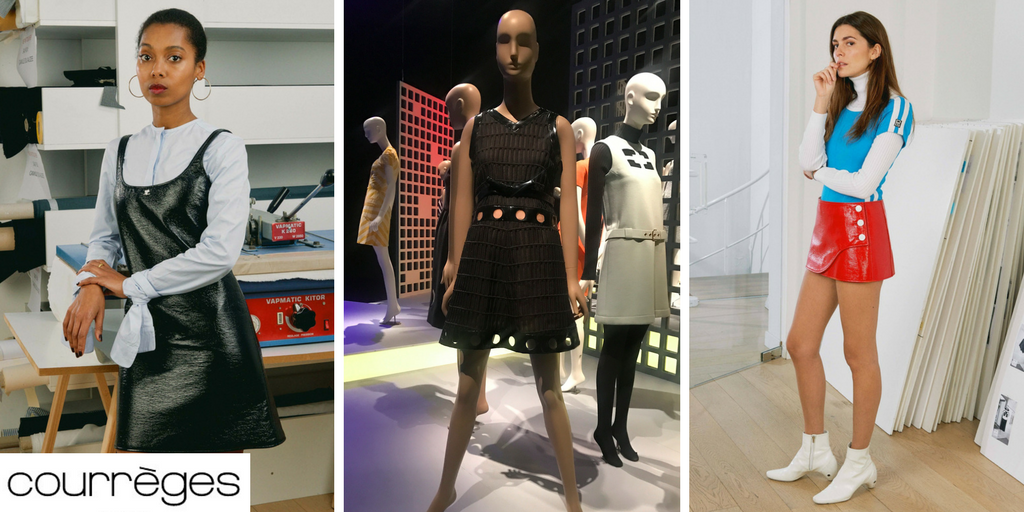 In 1961, Balenciaga’s assistant, André Courrèges, left to start his own line. In an attempt to break from the Balenciaga aesthetic, Courrèges showed his pivotal 1964 collection inspired by space exploration of the 1960’s and modern sportswear using athletic women in plain white room - and it worked. At Paris Fashion Week, we still see the iconic white boots, black vinyl, and circular details that guided the design sense around the black couture dress from 1968 featured center. 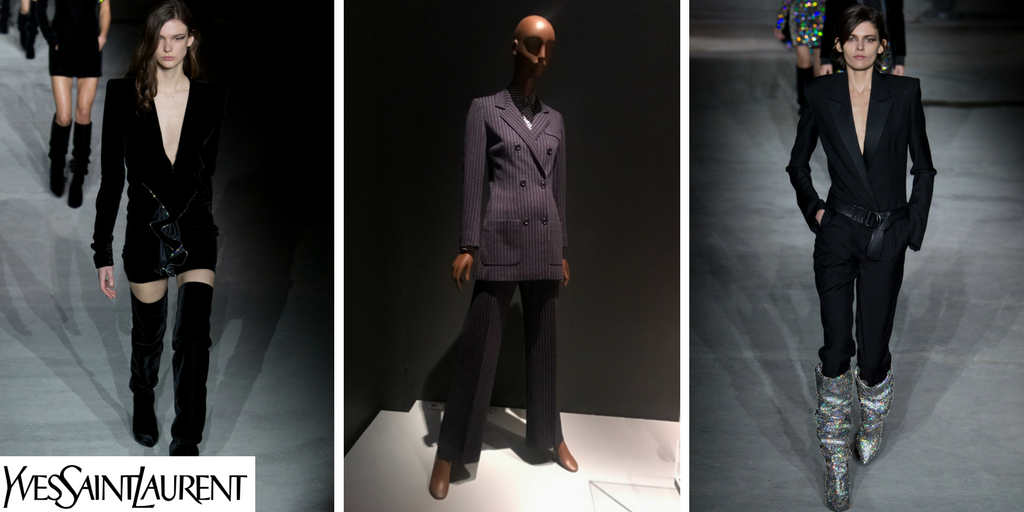 Christian Dior was the champion of post-War fashion by bringing elegance and excess back with the New Look. When he died in 1957, his 21 year-old assistant Yves Saint Laurent took over as artistic director. His final collection with Dior in 1960 also marked the beginning of his new aesthetic - one that embraced pantsuits and new feminine mystique. Now referred to as Saint Laurent, the design house is still embracing the tailored suit and sharp angles in the most current collection that YSL championed in 1967. 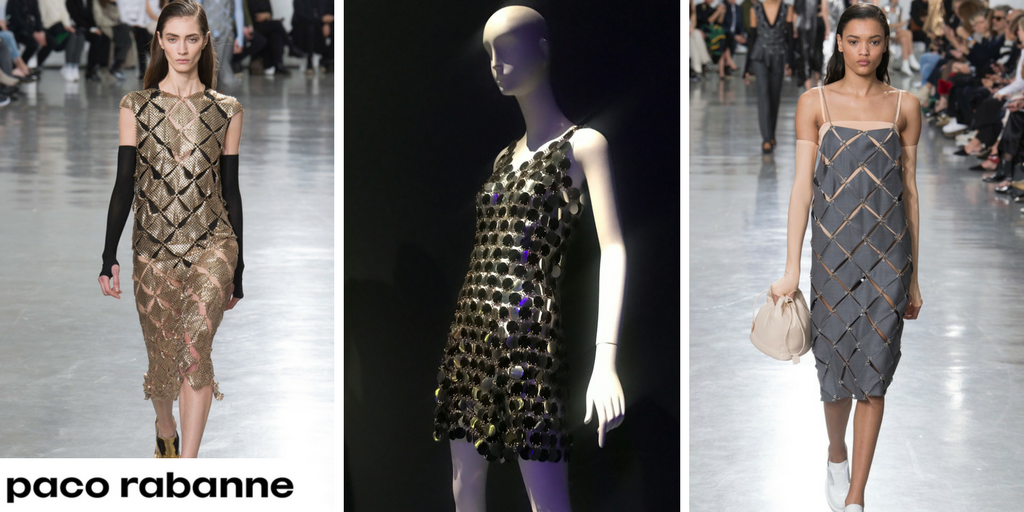 Paco Rabanne came from the legendary design houses of Dior and Balenciaga, but as a jewelry designer, not costume. His designs show this background, linking together unconventional materials including plastic and metal pieces to create unique, although not comfortable, designs. The design featured in the center from 1966 would have been worn over flesh-colored body stockings to make the wearer appear as if she was wearing nothing less. In the Autumn 2017 above, Paco Rabanne is still using the creative construction, material, and body stockings to create the unconventional style the house is known for.

Hooked on Fashion History and want to learn more? The “Paris Refashioned: 1957-1968” exhibit at the Museum of FIT runs until April 15 in New York City and is free to the public.
https://www.fitnyc.edu/museum/exhibitions/paris-refashioned.php

What's Next for Sustainability?