The Met Gala happened last night, or as many would refer to it as: “The Weird Oscar’s of the East”. Since it’s a big fancy event with big fancy dresses I decided to write about it. But actually, this piece didn’t start out as planned. I had to go buy a bottle of wine (or as I like to call it “writing juice”) and then I got distracted doing other things like petting my cats. Eventually I got back on track and got down to the meat of it, what you all apparently like: me drinking wine, making a fool of myself, and talking about fluffy expensive dresses. No seriously, you guys all really liked that piece about the Oscars. Not sure why. But I just want to remind everyone that I can also do smart things like excel and algebra.

Anywho, let’s get down to brass tacks cause I know all y’all just want to see some dresses. 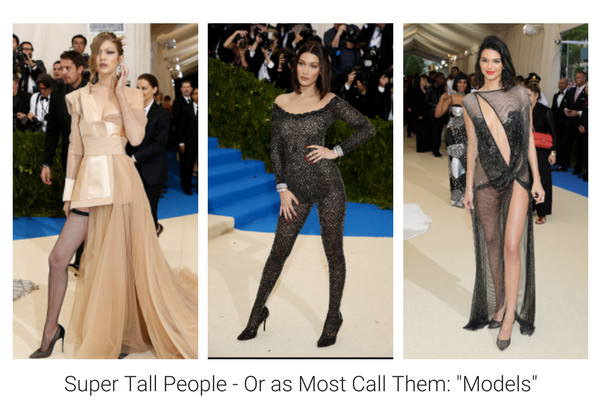 If you cover half of Gigi Hadid with one hand she looks sexy. If you then look at the other half she looks glamorous. It’s like one of those puzzles you play in a magazine at the doctor’s office waiting room. Keeping it in the family, we have Bella Hadid. I’m so intrigued. Like I don’t actually have any strong opinions because I just want to know how this garment was made and what are you wearing underneath. Like the world’s most invisible underwear? I don’t know! We also have Kendall Jenner who falls into this category of “Gravity Defying Clothes That I Don’t Understand How They Work”. Tape, I guess? 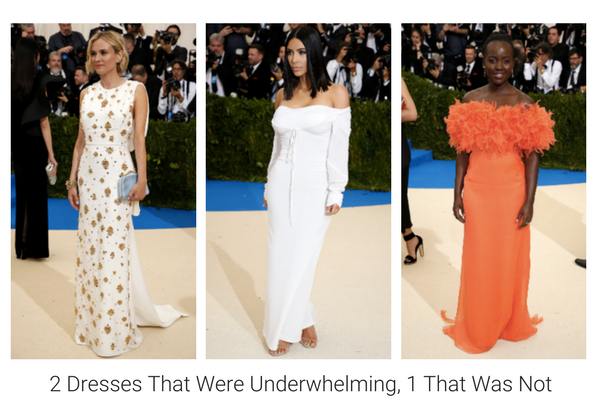 So now we we have Diane Kruger. I want to like it but I’m sort of bored. I just don’t have anything funny or interesting to say. Sad! Also, did anyone see Kim Kardashian at the Met Gala? No? You didn’t either? Probably because her getup was either a) also sort of underwhelming, b) not something she usually wears, c) both. She was in Vivienne Westwood, by the way. Then there is Lupita Nyongo and I have this idea of what went down in her dressing room an hour before the Gala:
Lupita: “This orange dress looks boring.”
Stylist: “Well, in this bag of stylist tricks of mine, I have a feather boa in the same color of your dress. Would you like me to wrap you in it?”
Lupita: “Yes.” 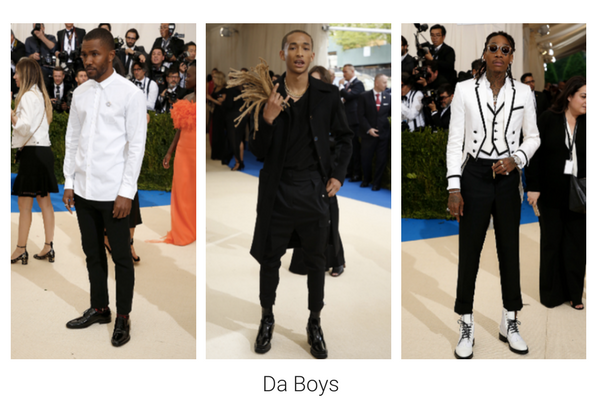 Yes, I know. These aren’t pretty dresses but I still have to show them, k? Frank Ocean looks like some punk little teenager stole his jacket on the way into the Gala and his favorite pen was in the pocket. Yea, I’m sorry, Frank, that sucks. Moving on, can anyone tell me what Jaden Smith is holding? Wait - is that his hair? I don’t want to know. Nevermind. Wiz Khalifa. This is cool. I like it. Also, this is Thom Browne in case you are actually waiting for me to give you a piece of valuable information. 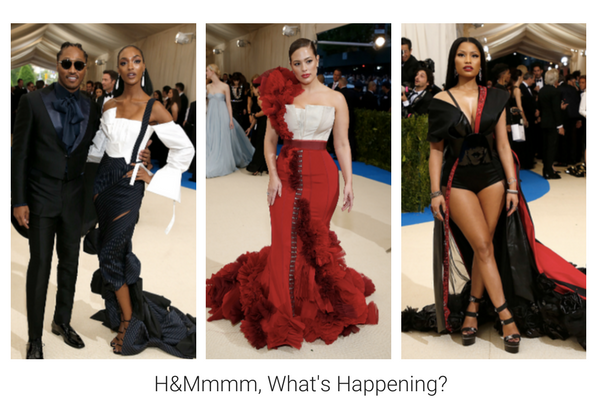 PEOPLE ARE WEARING H&M. Like Future and Jourdan Dunn. Also Ashley Graham who is wearing the type of dress I want to touch. What are those ruffly things doing? So interesting! Nikki Minaj, you’re wearing H&M, too? What’s going on? Also are you wearing a Sia Belt? It must be a Swedish thing. But, really, what a great marketing team. Hats off to you H&M.
Väldigt imponerande (that mean’s “very impressive” in Swedish, I think)! 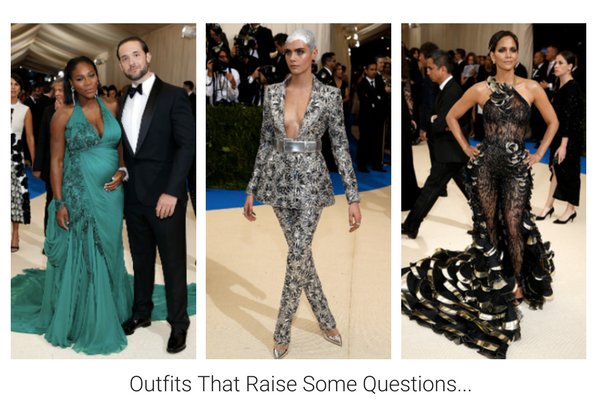 Serena Williams obviously looks phenomenal, but I have a question. Supposedly her original pregnancy announcement on snapchat was supposed to be private. Would it have happened tonight and I would’ve had that much more exciting of a night? The world will never know! Also
Cara Delvingne, what is real and what isn’t? You’re hair? Your bod? Are you a robot? Tell me!
And lastly, Is Halle Berry getting younger? What’s the secret? I want to know. I’m almost 30. 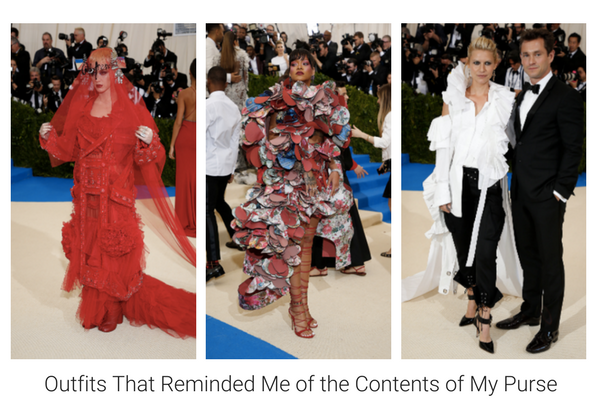 Katy Perry Looks like my favorite lipstick got stuck in a pants pocket in the dryer. No, that was my favorite shade! This lipstick - I mean dress - is by Margiela. Then you have Rihanna who looks like that thing of post-it notes that you let sit at the bottom of your bag too long and it starts to curl up and will never look the same. Sad, unusable, curly post-it notes by Comme de Garcon. And then there is Claire Danes who is that one crumpled tissue that lives at the bottom of your purse. But a very pretty tissue. I like it, Claire. 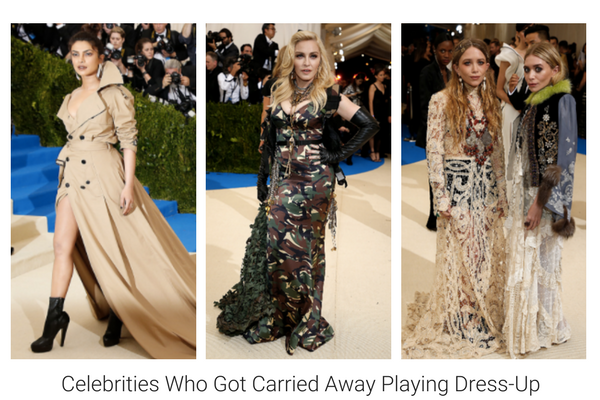 Priyanka Chopra is the most impractical Indiana Jones I have ever seen. But also the most fabulous. Sorry, Harrison. Moving on, all I can say about this Madonna get up is: I TOLD YOU (especially you, Elizabeth). Growing up in rural Pennsylvania I knew this would be cool again. Or if it’s not, don’t tell me and let me relish in this satisfaction. Mary Kate and Ashley Olson also like they found a really old, expensive pile of dress-up clothing and put something together. I mean, I dig it.

Zendaya. The fashion historian voice inside me is saying “But why an Italian designer in the midst of an exhibition celebrating the intersections between Japanese and French design?”. The wine side of me is saying “JUST GO WITH IT.” Apparently, Janelle Monae told the New York Times that she “Feels Great” at the Gala. I mean, I would too if a cloud was literally floating me around the place and I didn’t have to walk. Which we all want to do, Janelle. Great job like always. Then there is Blake Lively. You look like a blue phoenix that might spontaneously erupt into flames and be reborn as something more beautiful. Is that possible? Who knows!

If this assortment seems a bit random, well it was. Year after year we see celebrities dressing the part and playing into the theme. While I braced myself for some possibly offensive cultural appropriation (think 2015 "China: Through The Looking Glass"), it didn't seem to surface. If anything no tangible theme came through with the attendees. Well, either that or the wine blurred my critical eye ;)