I need to preface this article by saying I love fashion but I don’t have the patience for movies and I find red carpet interviews really uncomfortable to watch (y’all are too nice). For all my movie information I go to my mom who tears out the list of Oscar nominations from our local newspaper (yes, a real newspaper) and scours the movie theaters to see the important ones. So, how does one write about the Oscars when you feel as blase* like me? You pull out the bottle of wine and get right to the dresses. 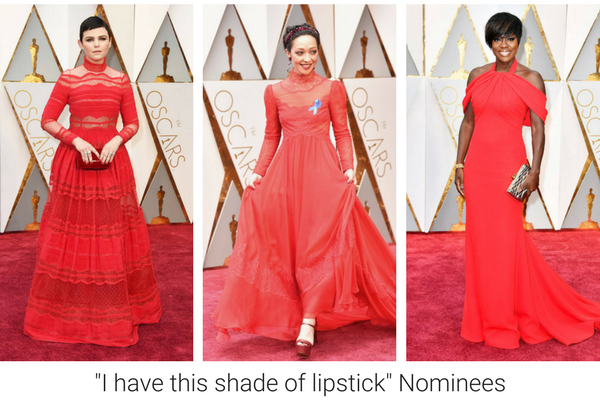 During the few seconds I actually watched the red carpet show I heard someone say that the red color of the carpet was chosen because it was flattering on the actors who walked it. Aha! I see what you did then, ladies. Ginnifer Goodwin is wearing Zuhair Murad and it is interesting, but in a good way (I promise). Next we have Ruth Negga in Valentino and I’m still not sure who this actress is. I’ll ask my mom. Viola Davis just always looks so damn perfect. Here she is in Armani Prive and she’s kind of blending in but I’m not hating it. 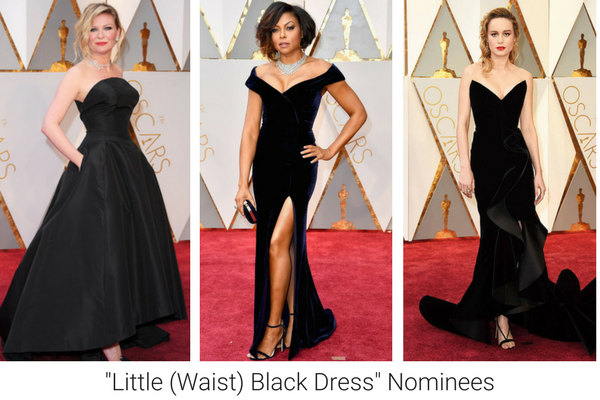 I mean, you women look great. But I do have this feeling that your stylists were like “Black is so obvious, no one is going to wear it. But you’re going to look amazing. Trust me.” And then they all showed up wearing basically the same thing and they’re slightly annoyed right now. Kirsten Dunst in Dior - obvi. Taraji P. Henson in Alberta Ferreti - slay. Brie Larson in Oscar de la Renta - you’re great. 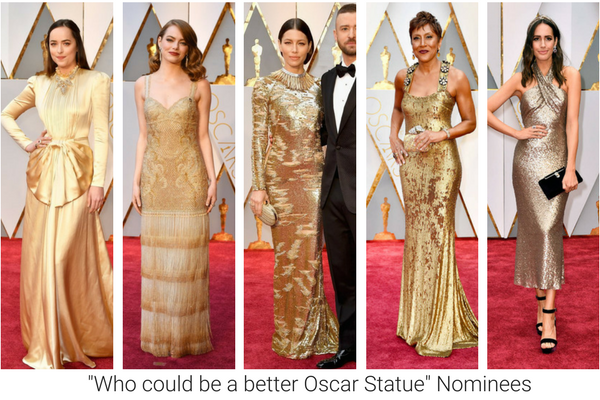 Okay ladies, I’m sensing a theme, but embodying the Oscar doesn’t necessarily get you one (except for you, Emma Stone, except for you). Dakota Johnson - oh my. I’m just going to skip you. Emma Stone is wearing Givenchy and I’m bored. Jessica Biel probably looks the closest to that little statue and I’m not surprised since I never assumed she was a real human being to begin with. She is wearing Kaufman Franco. Robin Roberts - I like you so you know what, you just look good and that’s all I’m going to say. I don’t know who Louise Roe is but she is wearing Pronovias which I only thought did wedding dresses (I watch Say Yes to the Dress). 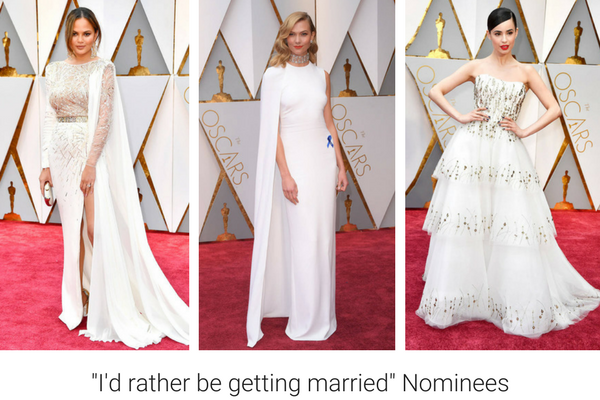 Speaking of getting married, apparently that is a trend now. I always thought that white dresses were something you just didn’t do. But what do I know, not like I went to Parsons or anything. Chrissy Teigen in Zuhair Murad. They managed to get a photo of her without John Legend which is lucky because they’re so cute it’s annoying. Karlie Kloss in Stella McCartney and I’m not sure why she is at the Oscars. Sofia Carson in Monique Lhuillier and again I’m not sure who this person is but she’s doing a great little thing with her arms there. 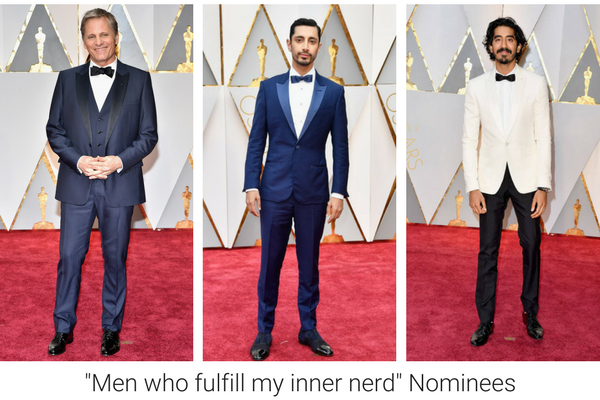 I felt bad not talking about the men who showed up to the Oscars, so I picked a few that resonated with me: Aragorn, the pilot from Star Wars, and Dev Patel because we have the same name and he’s hot. They all look very nice. 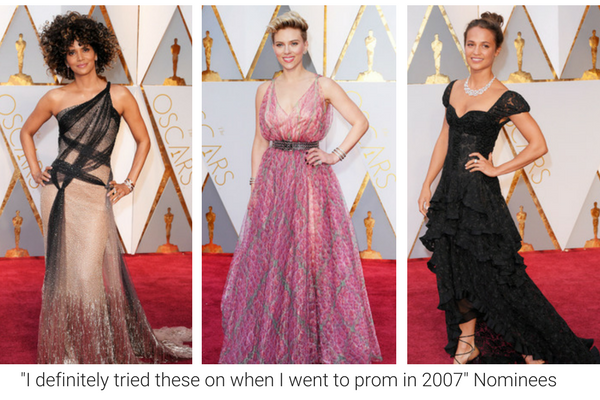 I think a part of me liked these dresses when I first saw them, but then I realized that it was because I tried them on my senior year of high school. I also took a hummer limo to prom so my taste was questionable. Anywho, Halle Berry wore Versace and when I first saw this I thought she wasn’t wearing a bottom and I thought, “BOLD”, then I saw it and was bored. Scarlett Johansson wore an Alaia dress and I just feel like she could do better. Also, are we still wearing belts on dresses? Is this still a thing? Alicia Vikander looks like the dancing emoji decided to mix things up and wear her black dress instead of red. 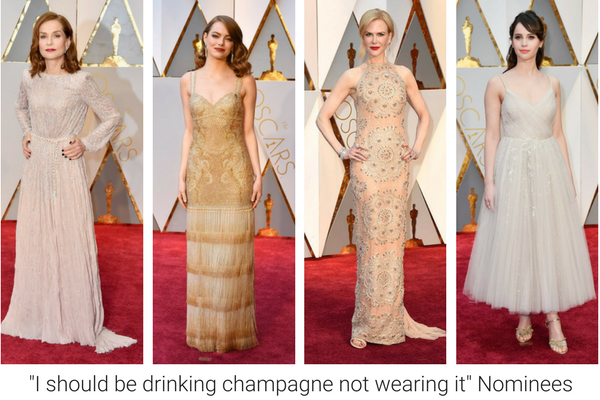 Aka, underwhelming dresses. Now don’t get me wrong, they all look lovely. But as someone who never gets to dress up and dreams about what princess gown she would pick if she had all the choices in the world and an occasion to wear them - these wouldn’t be my pick. Isabelle Huppert is super French and wearing Armani Prive. Emma Stone is wearing Givenchy which seems as underwhelming as La La Land (but not according to my mom who said it was “very nice and made her happy”). Nicole Kidman is wearing Armani Prive. True story: my middle school gifted teacher was married to a private pilot who used to fly celebrities and Saudi princes. One time he flew Nicole Kidman and she was supposedly the most beautiful person he had ever seen. I like to think that if you meet her in person she glows and you’re so distracted it doesn’t matter what she’s wearing. Jyn Erso, or as you may know her, “Felicity Jones”, is wearing Dior and looks like that Edgar Degas statue of the ballerina. Cute. 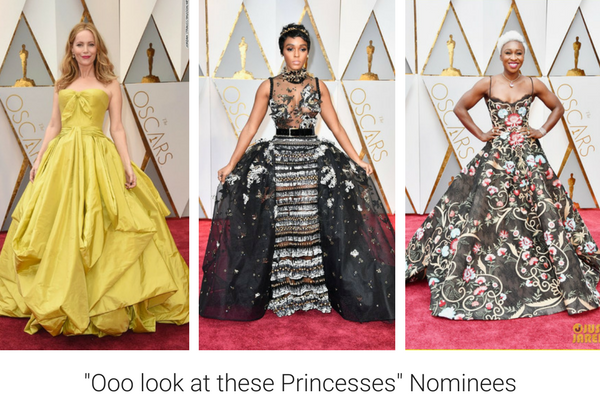 So if I one day went to the Oscars I would totally pretend like I was a princess - like these ladies. I just want to swim in these dresses. So much dress. I love it. Leslie Mann is wearing Zac Posen and trying to steal Hermione’s spotlight in Beauty in the Beast which is coming out in a few weeks. Janelle Monae looks like a straight up Renaissance painting in Ellie Saab. Also, looks like she’s wearing a belt - so I take it back ScarJo. Cynthia Erivo also showing up like a princess in what I would like to imagine I would wear to the Oscars. I mean I love it even if others don’t. 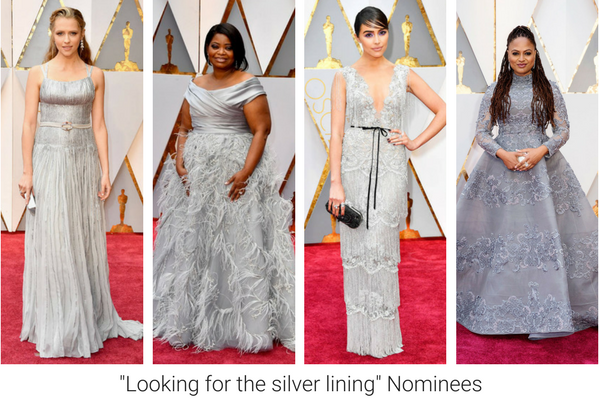 I just started singing “Silver Bells” in my head like it’s Christmas again. So if you can’t go Oscar gold, you go silver? Teresa Palmer has been in other things but I only remember her from that zombie rom-com. She is wearing Prada and a belt, again, so I will eat my words. Octavia Spencer is wearing Marchesa and I think those are real feathers. I want to touch it. Also, she looks nice. Olivia Culpo is also wearing Marchesa (I’m sensing many themes here) and as great as she looks, I just want to fix her bangs. Ava DuVernay in Ashi Studio also showing that silver ball gowns are a trend. I think.

Obviously numerous significant things happened at the Oscars that had greater social, political, and cultural meaning (Moonlight winning best picture, Viola Davis’s first Oscar win and acceptance speech, prevalence of ACLU ribbons worn) but if you don’t have fun with it then you aren’t fulfilling what the film industry wants: to be entertained. As for me, it was refreshing to take a step back and to look at the red carpet with no strings attached or deeper meanings and to embrace the beauty (or not so much) of what I was seeing. So, thank you, Oscars, for providing escapism on the screen and on the red carpet - and don’t worry, I’ll be bringing back the hard-hitting fashion journalism real soon ;)