Recently, I went in search of a pair of shoes that I had seen on Instagram and really, really wanted, however they had sold out on both the brand and department store websites I had been stalking. But my mama didn't raise a quitter, so I continued my obsessive searching until a few days later, when these beauties showed up at an off-price retailer (which shall remain nameless). I was elated--but I was also a bit confused. Were these indeed the same shoes? (They were.) And why, if they had been so popular, were they suddenly available at the off-price store? (No clue--there were still several sizes in stock.) I couldn't decide: was this deal the stuff of my retail-addicted dreams, or was its presence on clearance a sign that this was no longer that desirable of a product? Impulse trumps reason just about every time I spot this kind of deal, and it turns out I'm in good company. Recent NPD research showed that two-thirds of people shopping for clothes do so at off-price stores including TJMaxx, Nordstrom Rack, Off Fifth, and Neiman Marcus Last Call. So what's behind this big business? Let's take a closer look at some of the important things to know about where the industry stands today and where it's headed in the future.

State Of The Business

Increasing foot traffic and largely sustained growth in spending at off-price chains are music to a beleaguered and bruised retail industry's ears. You have two channel strategies in play: brands like TJX, Ross and Burlington who solely operate off-price outlets, and department stores who pursue off-price as a means to move overstock (and gain a footprint in smaller markets among other things). But exactly how many off-price stores are out there? 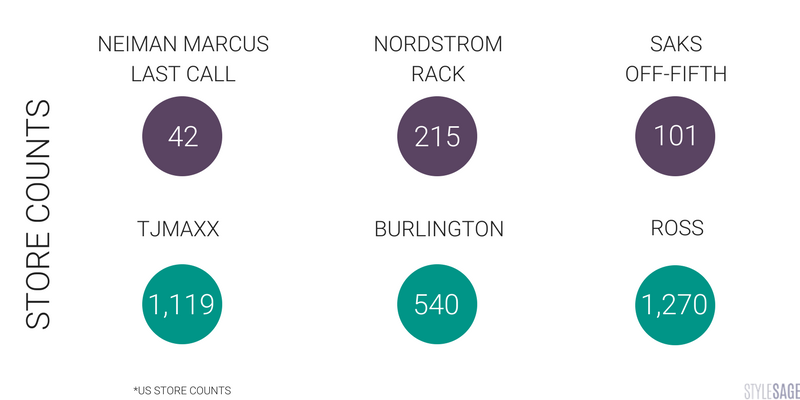 And let's not forget that Kohl's Off/Aisle and Macy's Backstage concepts have most recently entered this space as well.

What About Their E-Commerce Strategies?

A lot of the talk is around off-price physical footprint and store traffic, but e-commerce off-price is alive and well. While there are some restrictions on what can be displayed on sites like TJMaxx (for example you can't search by brand name on their site), these retailers are becoming increasingly savvy on how to recreate the 'thrill of the hunt' in a digital space. Some of the key differences between retailers are highlighted below. 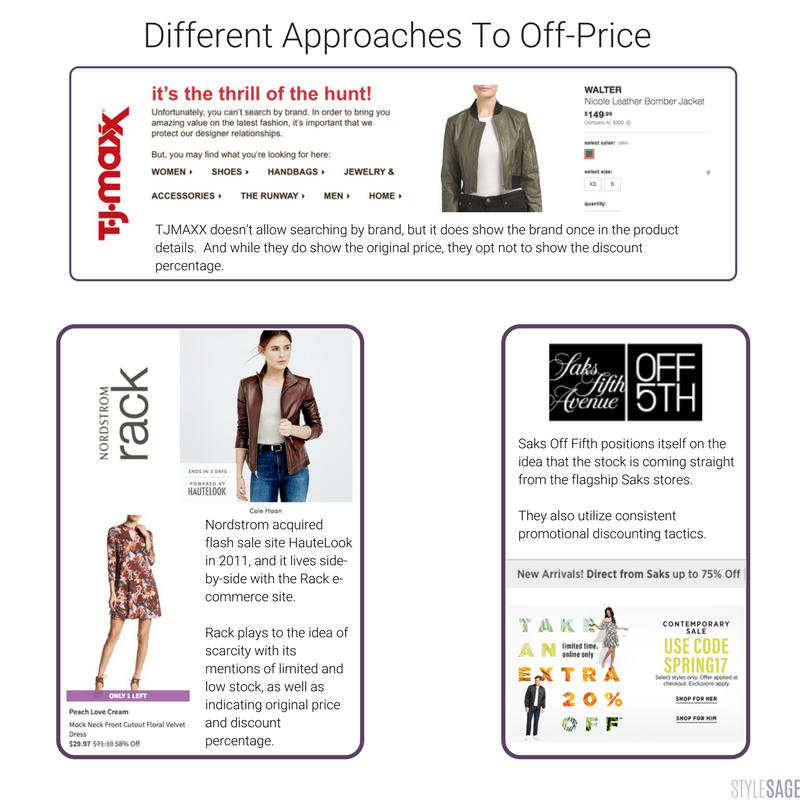 So just how much lower, on average, are category prices at off-price relative to their full-price parents? StyleSage data showed that prices were nearly 70% lower in each category, with the highest average difference in dresses (88%) and the lowest in men's suits (21%). 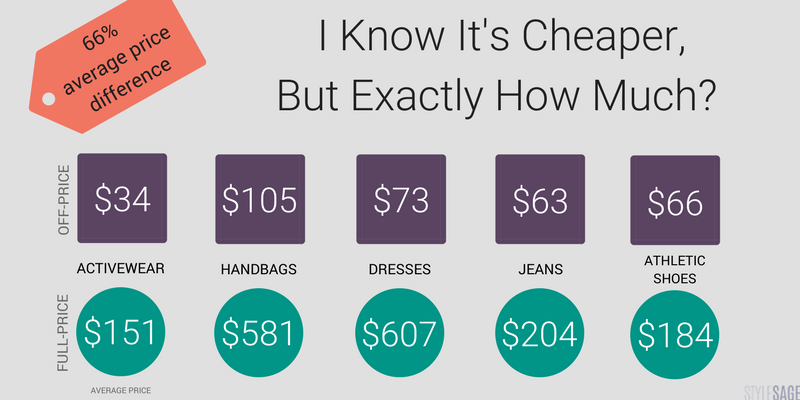 And who is introducing the most fresh product every week? Well, unsurprisingly, the channel most focused on off-price has, by far, the highest rate of new product introduction. However, the off-price department store has the highest percentage of items selling out. Here today, gone tomorrow! 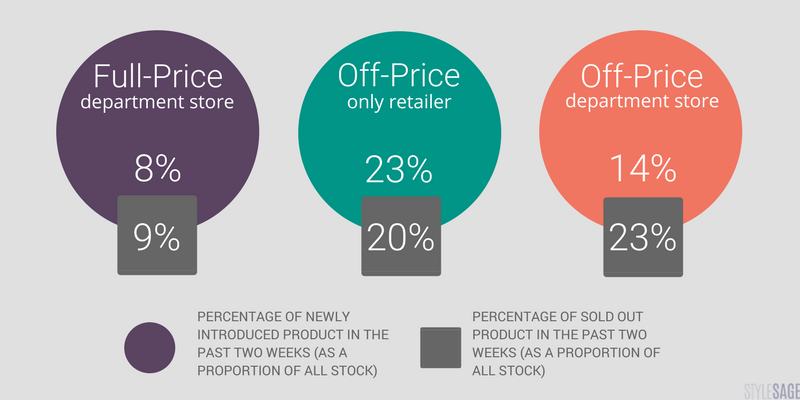 There Was A Point To That First Story, I Promise

Stream of consciousness, I know. So I wasn't crazy (about having seen that pair of shoes before). They had been on that department store's full-price website about a month earlier. So I wanted to see exactly how items move from the main department store to the off-price outlet. From the data below, you can see that it varies from days to months before certain items jump to the off-price channel, but this particular retailer took a consistent strategy of offering 60% off when making that move. 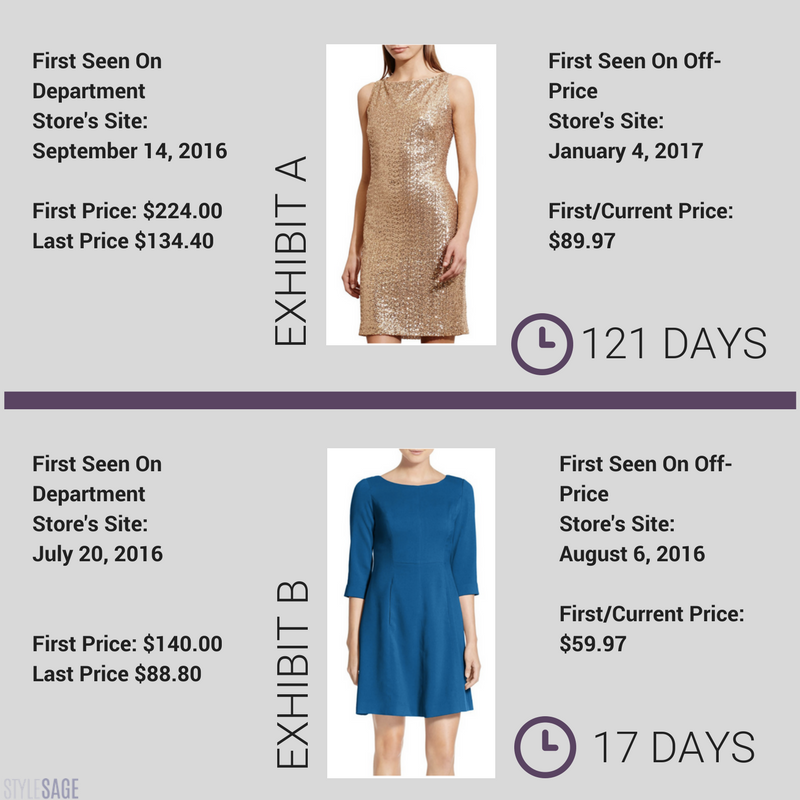 In conclusion, while we believe there will continue to be growth and opportunity in this category, there is one particular risk worth calling out, and that is to a brand's positioning when consumers become accustomed to seeing it at a 60%+ discount. The way forward should remain unchanged, and that means designing product and pricing it properly so that it maximizes its chances of selling through at full-price.

For more information on the off-price market and how to get your product and pricing right, contact us at hello@stylesage.co for more details.

Demand Planning in a Crisis

The Art and Science of the Pivot