If you start typing “uni” into the search bar at your favorite shopping site, you’re more likely to come across a unicorn shirt than something unisex. Even when I type “unisex fashion” into google I only get one ad (come on people! Money on the table here!). But what really is unisex in fashion and is the industry really going androgynous? Or do we just love unicorns that much?

While some of the latest and biggest runway shows have moved to gender-neutral displays as a response to the heteronormative nature of retail, have the big players in the market caught up? Not really. Gender binarism is a real and stubborn thing and is unfortunately not exclusive to the industry. As a nexus of creative thinking and change, fashion is usually a front runner in pushing change and challenging societal norms, and it seems like every day we are reading a headline debating the politics along gender lines. From legislation barring transgender rights being instated and then repealed, to women working to close the pay wage gap, gender conformity is a real and tangible issue that needs to be addressed. So instead of talking-the-talk, what is fashion actually doing?

What Do You Mean “Androgynous”?

To begin with, let me go back a few steps. What am I even talking about? Here are a few phrases you might hear: gender-nonconformity, gender-neutral, agender, gender fluidity, gender binarism, androgyny. There are many more, but all address the idea that we currently define people (and in fashion this means clothing) into two categories, men and women, and that other definitions of gender may exist outside of this concept. While this may be convenient in building out categories and organizing products on an ecommerce site, it doesn’t necessarily reflect the identifications that individuals are making around their own gender. 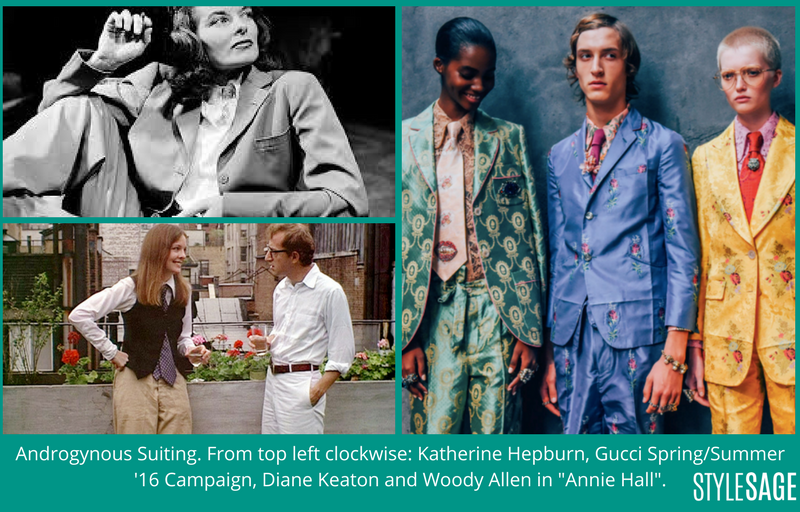 From the fashion perspective, the movement between men’s and women’s clothing has always been fluid. Think of the adoption of the suit early on by Katherine Hepburn or Diane Keaton in Annie Hall. While an article of clothing may be labeled “masculine” or “feminine”, subversive dressing has forced these lines to blur throughout fashion history. Also, as I mentioned before, current high-end campaigns and runway shows are moving into the genderless world.Take, for instance, Alessandro Michele’s work at Gucci since 2015. Runway shows at Gucci and subsequent editorial campaigns have morphed into one event that doesn’t differentiate between who wears what - and it doesn’t make it less beautiful or creative. With many of the same materials and cuts, this makes sense from a pragmatic standpoint around resources of time, money, and material. From a more symbolic view, though, this movement means so much more in the greater societal context.

Being Fashionable, Genderless… and Accessible

But what does this look like in the consumable retail world (for all of us plebeians who can’t afford Gucci)? Let’s go back to my “unisex” search. If I wanted to find a mass-produced gender-neutral piece, it’s more difficult. In the current US market across shirts, sweaters and jackets, items that are categorized as truly unisex account for less than half a percent of the total assortment. Outside of tops, most unisex items tend to be denim and sneakers. Take for instance H&M’s own unisex capsule collection, Denim United, with around twenty products specifically marketed as gender neutral. With smart marketing and clean, less trend-specific styles, this capsule provides the foundations for building a gender-neutral assortment. 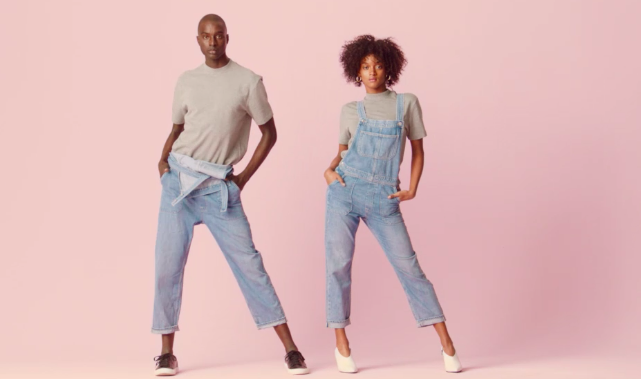 But what if you want to be trendy AND free from gender specifics AND Gucci prices? Hmm. It seems like we have found the gap in retail’s gender progressivity. Many smaller, gender-neutral brands have popped up in an attempt to fill this void. Take, for instance, Portland-based Wildfang that embraces the “tomboy” style, regardless of gender. Other brands include Canadian brand Muttonhead who uses the tagline “Unisex Apparel Made For Everyone” and kids brand Gardner And The Gang who gets gender right early.

So, does fashion have a long way to go in terms of gender equality? It seems like it. Of all the currently available unisex items, 15% have entered the market in the past month. Is this a response to the statements being made by the likes of Gucci, Public House, Alexander Wang, or Calvin Klein? Perhaps. But it doesn’t seem to be moving fast enough. As a historical button-pusher and rabble-rouser, fashion should be toeing the line off the runway as much as it seems to be doing on the runway. Hopefully the trickle down effect will mean future consumable fashion trends that are free from gender constraints. But until then, rock on whether you are: he, she, or ze.

What Does a Post-COVID Beauty Shopper Want?