If the weather isn’t enough to get your lazy butt moving outside, then the promotional activity of the activewear market sure will. Not only have we been blessed with pleasant spring weather, but it seems like we’re also being gifted with one sale after the other. Throughout April we’ve seen the market respond to the change of temperature as well as the start of festival season. So now that you have stocked up on your trendy festival duds, it’s time to pay attention to your running sneakers and yoga leggings. From new launches to discounts as high as your sit-ups count, the past weekend showed more movements on the active promotional front (see the pun there?). Hopefully you didn’t miss anything while you were out on a run, but in case you did, this is what happened:

Who was on sale?

Among your tried-and-true retailers for workout gear, the average promotional discount was 36%. Not bad. But it wasn’t just traditional activewear retailers that were on sale. Other multi-category retailers put activewear front and center this past weekend, such as Asos offering up to 60% active and Old Navy up to 50% off on their active line as well. While promotional types varied, customers had plenty of motivation to shop in the active space. 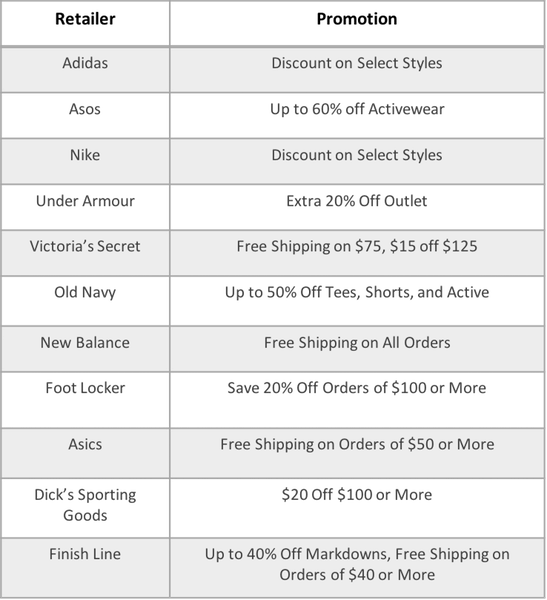 What was on sale?

What was the center of marketing activity during this weekend? Well you could’ve had your pick between “cheap stuff” or “new stuff”. Both homepage updates and emails sent out over the weekend came from these two angles: new launches that are being highlighted or a straight-up approach to the sale at hand. Interestingly, for some retailers, while they were indeed promotional by offering tiered discounts or free shipping, highlighting significant launches or collections was the preferred method for reaching customers. 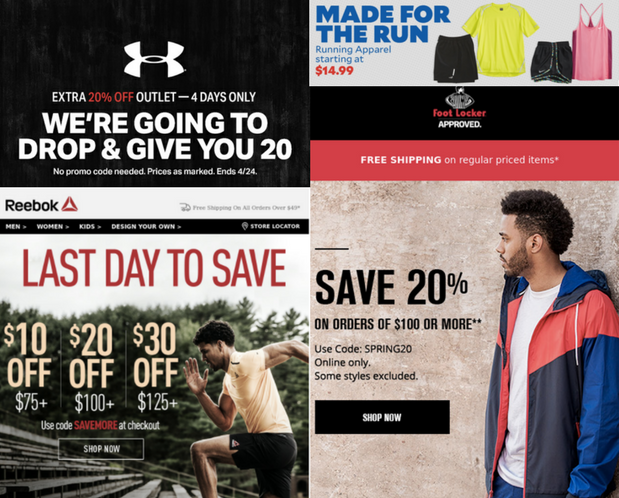 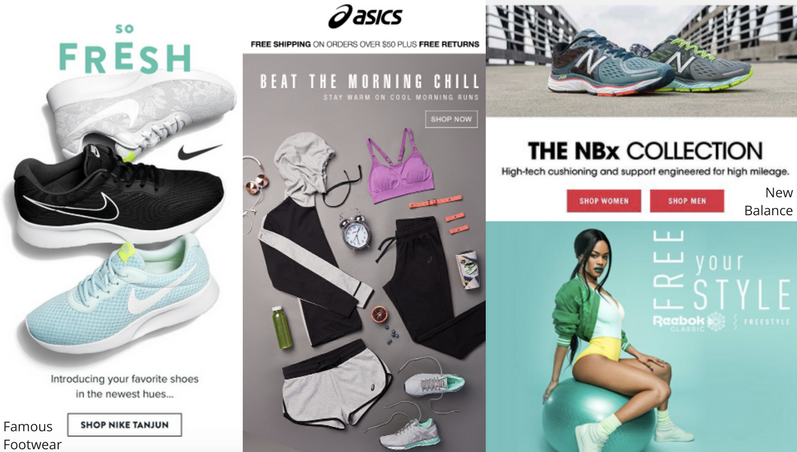 What does this past weekend teach us about promotions?

While retailers may shift from category to category or trend to trend, the paradox still exists between being new and being promotional. Think about it as a customer. You are just as enticed to purchase the trendy sneakers that have just been released as you are the super cheap ones that have just been marked down. In a perfect world you can have both. But as a retailer, this is harder than it seems. This past weekend we saw this very struggle in the activewear world. In a decidedly activewear-focused sale weekend, the supporting marketing activity still straddled the line between what draws customers in, unsure if it is what is cheap or what is new.

One thing is for certain, activewear is not going anywhere anytime soon in the promotional world. We can expect more and more multi-category retailers to shift their focus into this space, whether from an athleisure focus or a traditional sport one. Until that time, we’ll be here to keep an eye on all of the promotional activity for you, so that the only work you have to do is at the gym ;)

Want to know more about how you can track competitors’ promotional activity with one click? Check out more details about our tool here.