Retail has just passed the halfway mark of the year, and boy, oh boy, has it been a rough one for the industry. The past few weeks have seen companies reporting on how they’ve been faring thus far, and what we can expect for the rest of the fiscal year.

What to look forward to? The two biggest selling seasons of the year still remain: back-to school and holiday. However, there’s only so much lost ground to be won, and the guidance for the rest of the year put forth by brands and retailers isn’t instilling a lot of confidence in the market. Still there are a few bright spots to note, even if they were ever-so-slightly beating analysts expectations and showing early signs of turnaround. Case in point? Last week, Michael Kors and Ralph Lauren showed better than expected Q2 results, and laid out transformation plans that entail raising price points and cutting back on department store distribution which has been eroding margins and brand prestige. The jury remains out, but much is riding on their results.

This week we’re putting on our e-commerce analyst hat, to shed some additional light on the retail results.

Selena Gomez fan or not, there was much buzz during yesterday’s earnings call about their upcoming collaboration with the pop star. But paparazzi aside, it was a mixed bag: a projected year-end earnings decline, yet nearly a doubling of profit from the same quarter last year. Let’s take a look at how the brand is bringing its three-year-long transformation plan to fruition.

One of the first key themes was price point. As they continue to distance themselves from underperforming and over-promoting department stores (and this has been a theme of several calls over the past weeks), they noted upward movement in their price points, with 45% of their handbags ringing in at $400 or more. We examined the e-commerce data on price point to get another viewpoint on how this looks at key department store accounts versus their own DTC site. What was interesting to note, in particular, is that the markedly higher average price point at Nordstrom is part of their focus on the more premium 1941 line of handbags. 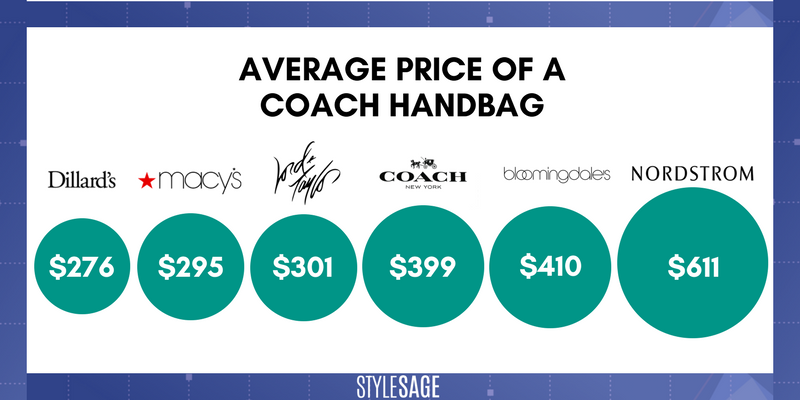 The second strategic area they mentioned was the men’s market opportunity; we have to agree that this corner of the market is far from penetrated. Why? Because not only does Coach’s men’s assortment of bags and accessories average only 15% of the total of women’s, it also commands a premium of 39% over the ladies.

And of course, the acquisitions of Stuart Weitzman and Kate Spade were central to the conversation, as they will continue to help Coach reach new audiences. How do the three complement each other? Well, their assortment compositions vary, to start. Stuart Weitzman primarily focuses on shoes with a side of bags, while Kate Spade has a larger assortment of apparel than Coach. They also differ in price point; Stuart Weitzman shoes command a premium at an average price of $423 a pair, Kate Spade averages $202, and Coach averages $227. 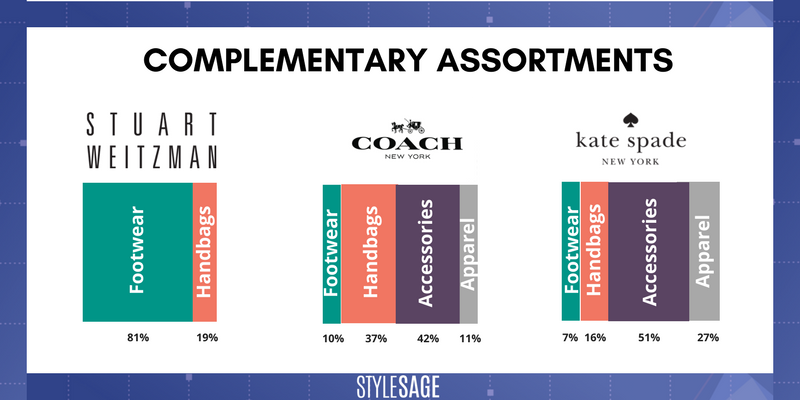 A diversified portfolio is breathing new life into this American heritage brand, and their respective performances over the holiday shopping season will be telling.

Urban CEO Richard Hayne is known in the industry for both his foresight and his candor. Yesterday’s earnings call was no exception, ‘It’s obvious that the environment surrounding apparel retailing in North America over the past year has been quite challenging, but I continue to believe the top line shortfall in our two larger brands in North America came mostly from poor execution rather than macro headwinds.’ And indeed, they had some less than stellar numbers to report on across its family of brands: Anthropologie, Urban Outfitters, and Free People. So what were those mistakes and what are they doing to fix them?

Speed-to-market is the operational challenge many of today’s retail retailers can’t seem to shrug off, and Urban’s brands were no exception. While they’ve historically tried to buy the bulk of their inventory earlier in the calendar and leave flexibility for additional buys closer and within season, this back-fired on them as they reported in their dress inventory. They decided early on to cut back on dress SKUs and ended up having too few to offer the market during the Spring/Summer season. This shows in the e-commerce data; you can see Urban’s dress assortment was proportionally less than half of Asos, a key competitor, over the past five months of the spring/summer season. 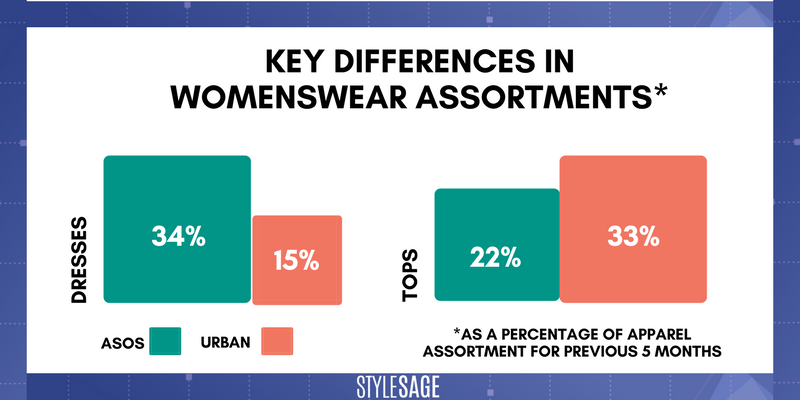 The result of unwanted and unloved product by consumers? Markdowns. The e-commerce data shows that Urban and Anthropologie had higher discounts than its Free People counterpart. Anthropologie and Urban averaged 32% and 33% of their assortment on discount, respectively, and these elevated discount rates also align with their respective comp rate declines of 4% and 8%. The bright spot is Free People, who has bucked the trend of its sister brands, with an increase in comps of 3% and ongoing distribution channel expansion. Indeed, our e-commerce data showed that Free People had only 19% of its products on discount.

The market will be looking to Urban to better balance their portfolio's performance as they undergo major re-alignment within their product and design functions. As a company that has always been ahead of the curve, we look ahead in anticipation as to how these changes will manifest themselves at the point-of-sale.

At the close of the market yesterday, Dick’s Sporting Good’s stock was down 23%. Why so down, our sporty friend? To start, the retailer posted lower sales than initially projected, and hasn’t been able to take advantage of the consolidation in the industry that they thought would be a boon to their growth. Where did they struggle? Competitive pricing and promotions were top of the list as they reviewed the quarter’s results. So what are they doing about it?

We looked at our promotional data to see whether Dick’s has been changing their promotional tactics over the past few months, and the depth of promotions (percentage off types) has remained largely constant since the beginning of 2017, hovering around 40%. To reinforce their commitment to pricing, they have implemented a 'best price guarantee' to prevent price-conscious shoppers from purchasing branded goods elsewhere. Let's hope this guarantee translates to the bottom line. 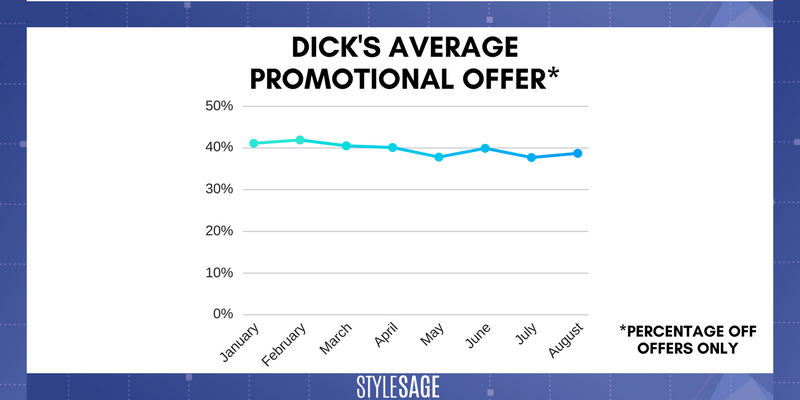 Where are the opportunities? They cited their private labels, including Field and Stream (Outdoors), Walter Hagen (Golf), and Calia by Carrie Underwood (Women’s Activewear) as still not fully realized market opportunities. But how aggressively are they pricing and discounting these brands? Let's take a look at their private label Calia; it's priced to move with 72% of the assortment at $50 or less. But how does it stack up to Nike's women's active assortment? 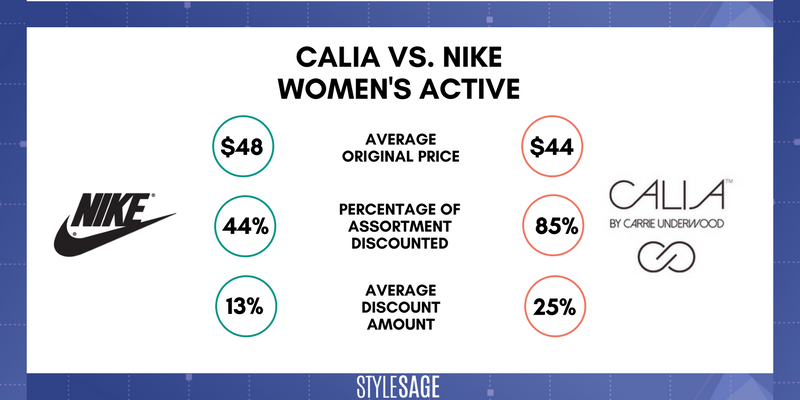 What should be noted is that there is particular downward price movement being faced in Dick’s women’s activewear categories, moreso than men’s.

And the downward price pressure is even more pronounced if you remove underpinnings like sports bras from the mix.

They should keep a tight focus on this assortment, paying close attention to the market’s signals in this increasingly crowded space. We’d advise they not pin all their hopes of rebound on this category and look at ways of building stronger fan bases for their in-house brands.

Without a doubt, Dick’s investments in omni-channel retail should help to improve the customer experience, but the question is how well they will be able to compete with Amazon and their star brands’ own DTC channels. In the meantime, it seems that Dick’s management is certainly hoping for a winning half court shot this fiscal year.

As we look to the second half of the year, the big push is on, but the market has already been correcting for lowered expectations. Who (besides the big A) is going to win? We’ll be keeping tabs right here.