Urban Outfitters CEO Richard Hayne is convinced the reign of athleisure is over and that denim is poised to take back the crown. If “fashion” is fashionable again, does that mean activewear is on the decline?

As far as URBN is concerned, the company shared solid Q4 results, driven by a high demand for new bottom styles. Several other retailers, including Gap, J. Crew, and Abercrombie also reported strong growth in denim categories during their fourth-quarter earnings.

Just how much has the demand for new styles outside of activewear impacted retailers? The data below shows fast-fashion brands introducing denim up to twice the amount of athleisure bottoms since the start of 2018. 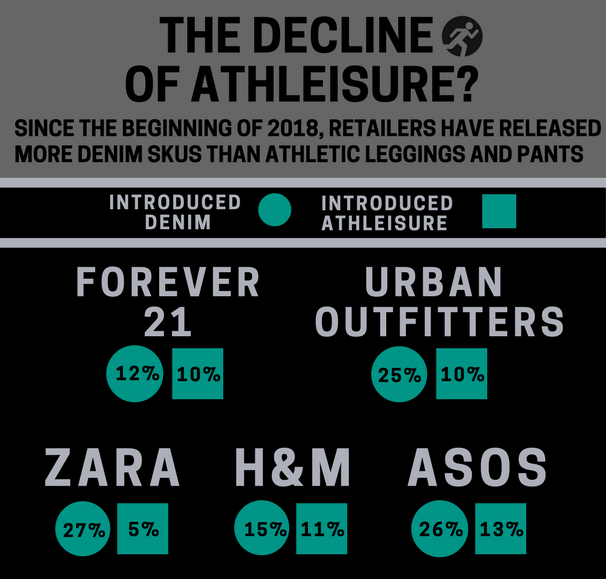 Growth in the activewear sector has been constrained by weak gains in retail channels. From 2011-2016, athletic wear grew 7 percent a year, compared to the sluggish 1 percent growth of general apparel. Yet in 2016, athletic apparel slowed to 6 percent, amid increasing competition in the sector and overall difficulties in many wholesale department store channels.
Our advice to retailers in the athletic and sportswear space is to not only be attuned to other non-active styles such as denim, but also to clearly differentiate their existing and future active offering from competition.

J.Crew's Makeover by the Numbers

Making the Case for Menswear