An article last week in Vox surfaced a shift - not just in fashion trends but societal perceptions - around the suit. Donned mostly by men, it has "historically associated with projecting elegance, authority, and mastery of a profession, those qualities hearken back to the days when suits were prevalent, worn by the Atticus Finches and Don Drapers of the world." It went further to ask, "How long until we realize the suit — while still used for special occasions and by a shrinking number of traditionalists — has become associated with the opposite? The suit has become a uniform for the powerless...something associated with job interviews, junior salespeople, and young employees."

While it's an angle we hadn't fully considered before, we do know its fall from the graces of both fashion and society at large are in part thanks to the new era of work and worker, and also better and more accessible fashion options for men that aren't suits. (Even banks, considered by many the last holdout in formal dress codes, are shelving their suits.)

I see this shift taking place, at least anecdotally, camped out at a WeWork, surrounded by millennials and fellow startups, where unofficial dress codes include jeans, t-shirts, and assorted sportswear. Yet stories like these always drive me back to the data - does it second this phenomenon and what else might it signal? Let's take a closer look. 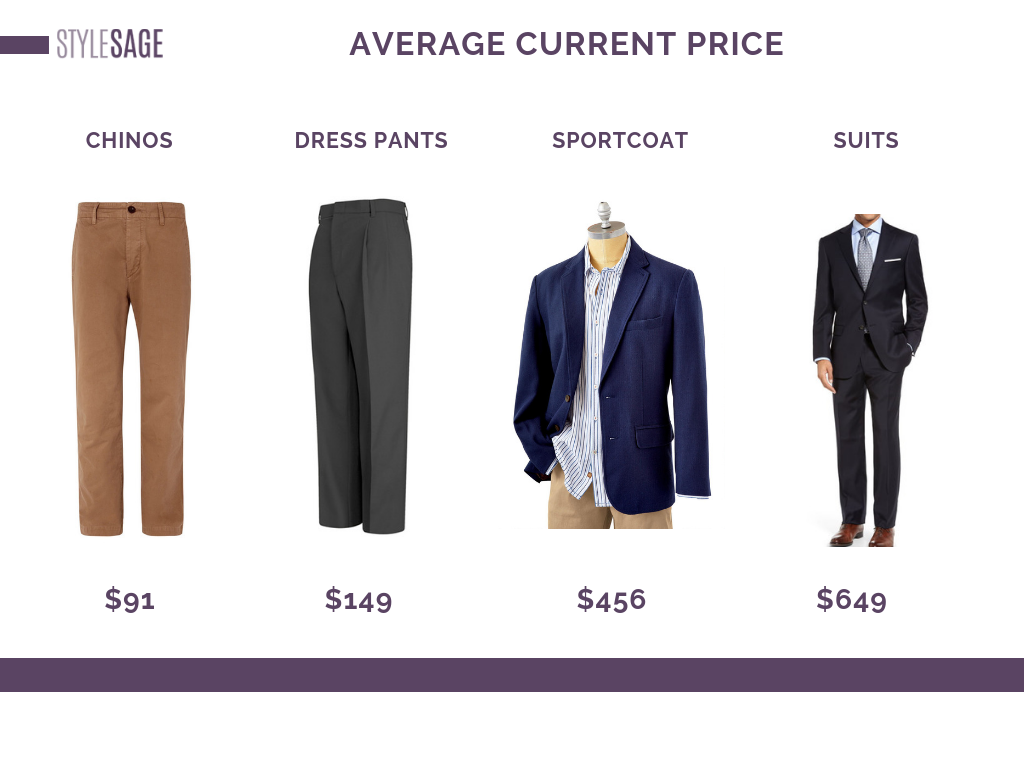 Men's basics aren't cheap but focus on the notion of "fewer, better" things. The average cost for a pair of chinos is, unsurprisingly, less than dress pants. Of course a sportcoat on its own costs less than a suit, but what's interesting is that the average pair of dress pants plus a sportcoat is less than a suit. This is interesting because consumers increasingly value flexibility when it comes to wardrobing options. Let's further explore the pricing dynamics in play in the suiting category.

Suit Prices Are Down But...

So are prices for other categories of key menswear items. And on the other hand, some prices have increased YOY. 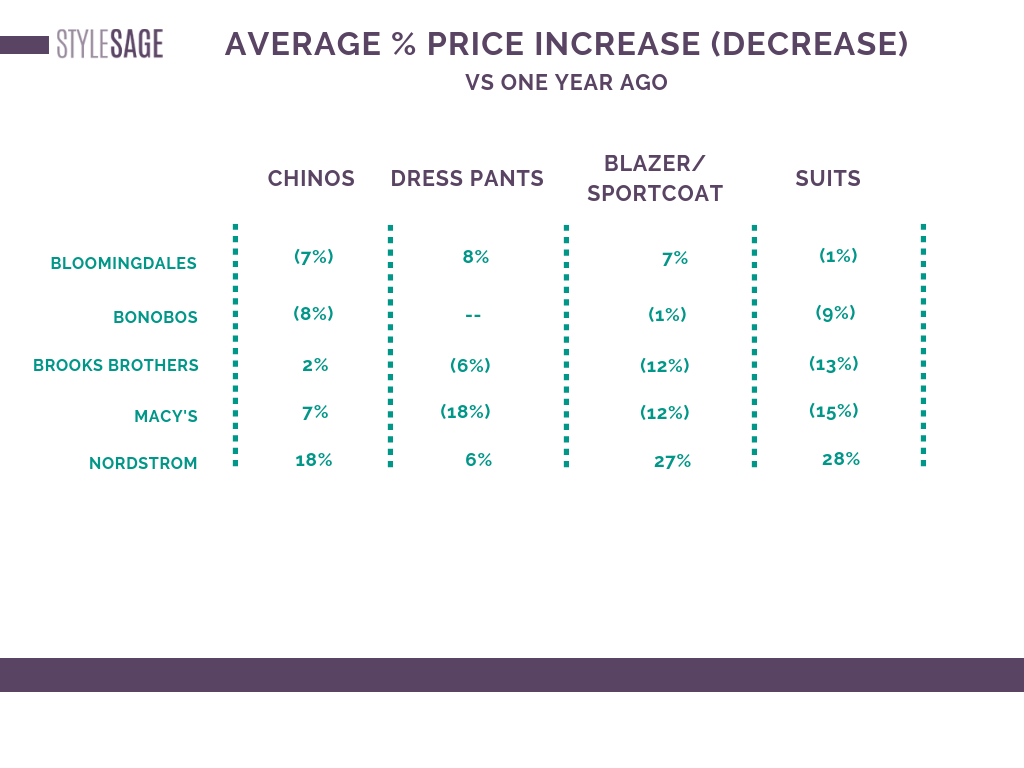 This handy table shows how much the current price of four key menswear categories has increased or (decreased) since the same time last year at five US retailers. The first data point to call out?

Four of the five retailers in the sample have seen suit price decreases from last year.

While that may seem like an immediate "aha" moment, telling us suits are in decline, we should next look at average prices in blazers and sportcoats to see if there's any corresponding uptick in prices offsetting suits. (The logic here being that if suits decrease, more casual sportcoats - a substitute - may increase.) What we see is that three of the five retailers also decreased their blazer prices. Yes, the decreases are less significant than for suits, but this data could be telling us that there's just general downward price movement in key menswear categories and at certain retailers.

If the right side of the above table is the dressy end of the menswear spectrum and the left is the casual, then we ought to take a closer look at chinos. What we see here is the best evidence so far that the "casualization" trend we talked about earlier is taking place. Indeed, we see that three of the five retailers increased chino pant prices. All of these data points taken together - price decreases in suits and increases in prices in chinos - indicate that there's some shift away from traditional suits underway though it's not as resounding as we may have expected.

Are There Fewer Suits Available Today? 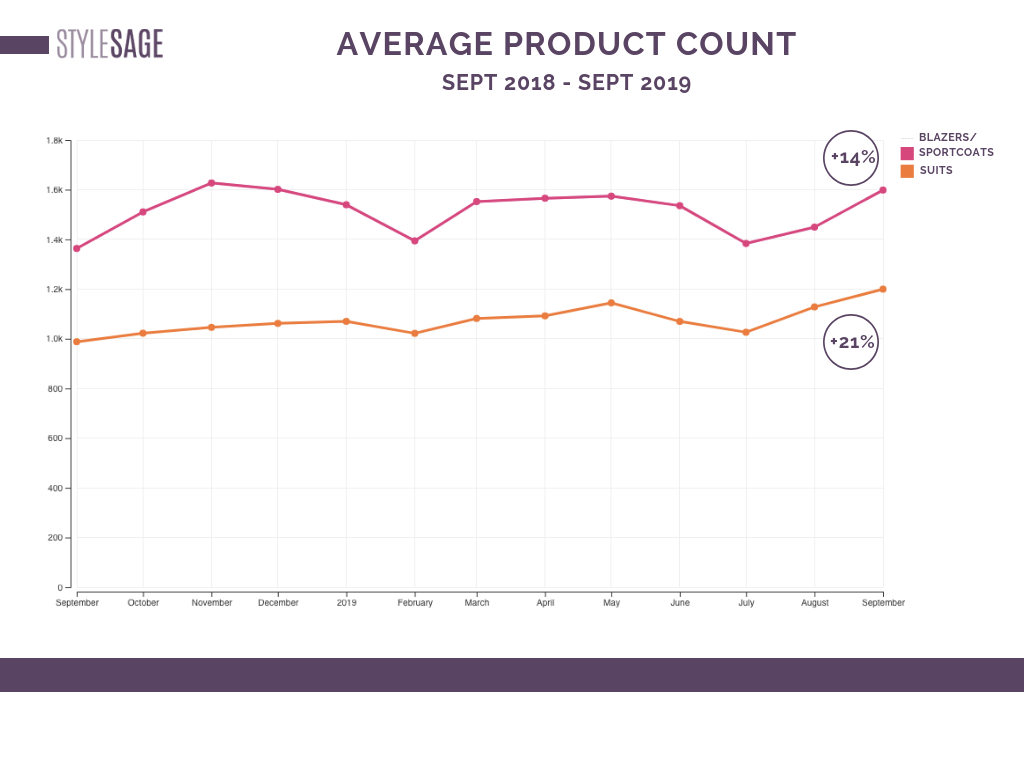 Interestingly enough, across a sample size of five major menswear retailers, both the count of suits and sportscoats is up from one year ago, by 21% and 14% respectively, though it's worth noting that the average product count for blazers is significantly higher than suits. (Both categories show the same seasonal patterns, with inventory increasing during the late summer months into fall, and then creeping back down around February.) This tells us - not a story of overall decline - but that blazers and sportcoats are more plentiful, perhaps because they are inherently more versatile.

Maybe The Category Isn't Dead After All...

Not only has the men's suiting business been disrupted by changes in how men dress, it's also been disrupted by digitally native brands bringing bespoke suiting to a market that had traditionally been unable to access it due to barriers of high price. Some of the key players in this newer bespoke suit and shirting market include Indochino, Black Lapel, and Proper Cloth, all of whom are bringing customized tailoring to the masses. All of this amounts to competition the larger department and specialty stores must figure out how to effectively counter. A few ways to do so include: marketing fit, tailoring, and customization services, ensuring that suiting options aren't stodgy and dated, and "tailoring" advertising and promotional campaigns to reflect the values and lifestyles of your next gen shoppers.