If there was ever a millennial pop culture icon for aspiring female entrepreneurs, Sophia Amoruso would be it. In 2006, she started Nasty Gal as a vintage reseller on eBay with no idea that it would make a grand entrance into the mainstream online retail scene with over $100 million in revenue in just six years. Not bad for a venture that started out with digging through piles upon piles of vintage clothing. In 2012, Nasty Gal received near $50 million of investment from Index Ventures, further cementing its position as a rising star in the fashion e-commerce space and launching its own designs.

Thus, the beginnings of #GirlBoss movement emerged against the backdrop of Nasty Gal’s phenomenal success and Amoruso’s meteoric rise to fame as its champion. It started with Amoruso’s first book in 2014, a memoir of her entrepreneurial journey that reads more like life lessons on taking charge of your life than actual business techniques. Being the school misfit and jumping from one odd job to another were wrapped up as elements that gave Amoruso the fortitude to successfully launch and grow Nasty Gal despite having no degree nor prior business experience. “The first thing I ever sold online was stolen,” admitted Amoruso. This candid candour about her past mistakes is exactly why the #GirlBoss message resonates with many.

Yet it is all not sunshine and rainbows in the Nasty Gal Galaxy. In 2015, Amoruso stepped down as CEO to focus on growing the #GirlBoss media platform. While Amoruso riveted audiences with the #GirlBoss message, the company itself began to crack apart. Nasty Gal had made several missteps in logistics infrastructure, paid user acquisition, product, and company culture (you read the whole analysis on what went wrong by BoF here) that ultimately led to the company filing for bankruptcy in Nov 2016.

However, not all is lost for Nasty Gal. The company was acquired by Boohoo.com in Feb 2017 for $20 million, and has since undergone a revamp on the website. As expected, the transition has been messy, with complaints of past user accounts being wiped and problems with the fulfilment of orders placed before the new owners took over.

Now, Nasty Gal has started afresh with a new product assortment, at a significantly lower price point than before. The current average original price is firmly between $40-$60 range, which makes for a good deal when combined with its current 40% off storewide promotion (likely in hopes of retaining past followers of the brand). Despite a shaky start, only time will tell if Nasty Gal can recover to its previous bad*ss glory.

While Amoruso is the face of the #GirlBoss movement, she’s only one out of the many pioneering women that came before her in the fashion industry. Here’s our top picks for self-made women who had their own rags-to-riches journey despite their non-traditional backgrounds:

We love our curves, we do. But some days you just really want that little bit of extra help to keep those sexy curves in so that you can show off a banging silhouette in that body-con dress. Enter Sara Blakely, the founder of the female-kind’s secret weapon: Spanx.

Blakely was selling fax machines door-to-door when she decided to seriously embark on her entrepreneurial ambition to make money off the idea of snipping the feet off pantyhose to wear under pants. With just $5000 in her pocket, Blakely wrote her own patent, made a prototype, jet-set off to a meeting with a buyer from Neiman Marcus and proceeded to wow with a live demo. And the rest, as they would say, is shapewear history.

(alongside husband Do Won Chang)

Korean #GirlBoss Jin Sook Chang first came to the US in 1981 with husband Do Won. A couple in their early/mid twenties, they sought the American Dream armed with just a high school education. The couple made ends meet through dead-end service jobs for three years before being able to pool $11,000 in savings to open their own clothing store. The store started as a 900 sq ft retail space in LA called Fashion 21. Now it has grown into the fast fashion powerhouse known as Forever 21 with stores across 48 countries. The Changs currently have a net worth of $2.8bn.

Guess dreams really do come true after all.

Who doesn’t know this glamorous fashion icon and avid rule breaker? Chanel has gone down in history for liberating women from the confines of restrictive corsets by designing the menswear-inspired Chanel suit. Chanel took a color that symbolizes mourning and made the little black dress a staple of the modern wardrobe. Her eponymous perfume, Chanel No. 5, has become a pop culture icon in its own right.

However, Chanel’s early years were humble. Born to a laundress mother and a street peddler father, her childhood was steeped in poverty. After her mother’s death, Chanel was given up to an orphanage, where she would learn how to sew and eventually make a living as a seamstress and thereafter, one of the most famous designers in the world.

Did you know? Netflix released its own version of the Nasty Gal origin story (loosely based off the #GirlBoss book). That’s right, all 13 episodes are out there right now just waiting for you to binge watch them. Just in time for the weekend, eh?

Before we sign off, here’s one last piece of Amoruso-quoted advice. Let’s hope you have better luck following it than we do!

(Pssst, according to StyleSage Promotions data, there’s a 20% off all shoes at the Urban Outfitters website right now through the weekend! Get moving!) 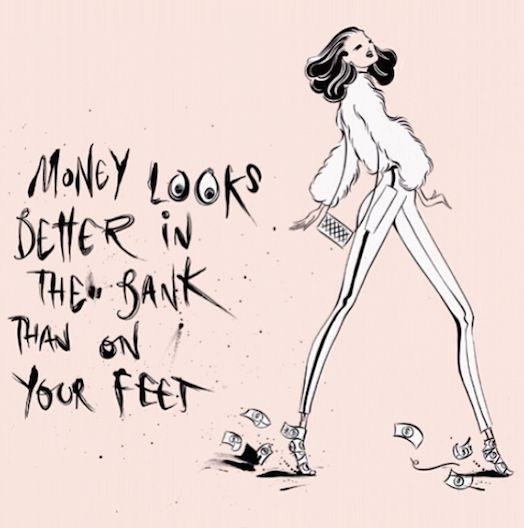 Other posts by Jacqueline Goh