This week marks an important menswear first - as Nordstrom opens its inaugural store dedicated to the male shopper (here in New York). It's both an interesting and strategic move. Interesting because the commercial real estate space in New York has certainly been adversely affected by the turbulence caused by major retailers shuttering doors in cost-cutting measures. At the same time, however, it's strategic, because the research shows that menswear market growth is outpacing womenswear (its 3-year estimated CAGR is estimated at 1.5% vs 1.3%).

We know that menswear only accounts for 40% of the market, but what does today's e-commerce data tell us? We took a closer look at women's versus men's assortments to see how they stack up to each other. 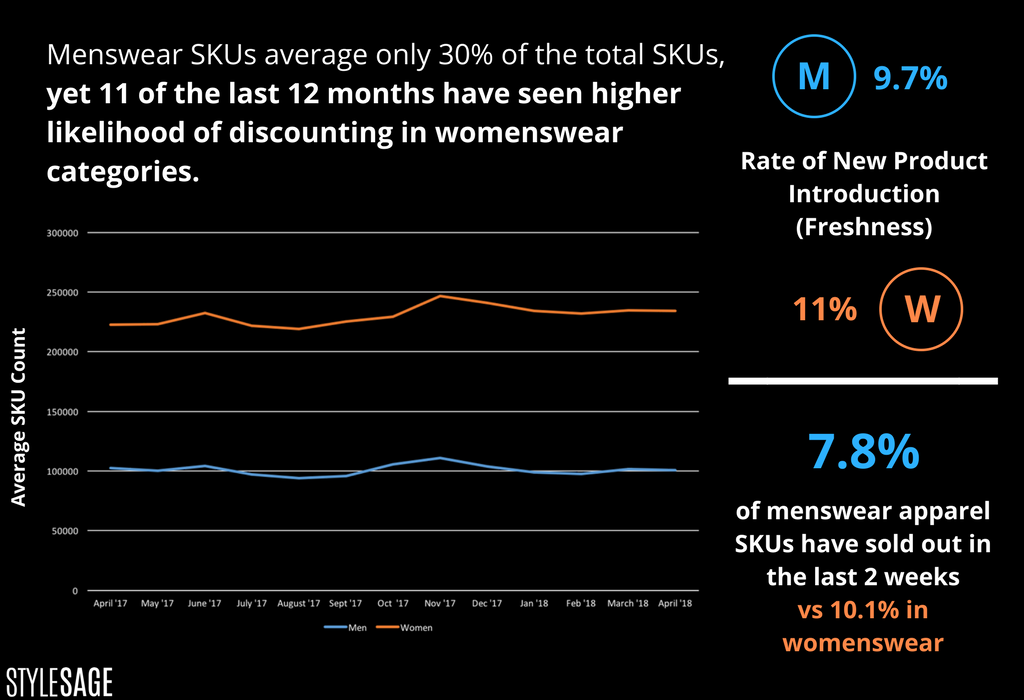 Our historic data shows that men's SKUs account for 30% of the total - which means that womenswear is more than double that of menswear. So if you tie this in with the statistic above that menswear sales comprise 40% of the market total, it's clear that menswear is punching above its weight class. What do we mean? Well, our research shows that menswear is consistently less likely to be marked down than women's. Essentially, retailers see a reduced need to take a markdown on men's apparel and are more likely to sell these products through at full price. Despite these positive indicators, we still see the menswear assortment being refreshed at a lower rate than womenswear - a fact many of us anecdotally know for reasons tied to the different ways in which men shop for apparel.

So while menswear may not ever be quite as fashion-driven as women's - across the board, at least - it's an opportunity to which more retailers should be giving a closer look.