The rise of a more casual work-dress culture has been a major boon for athletic footwear. Retail Dive recently reported that while the footwear market at large grew 13% last year, sports footwear grew by a record-breaking 46%.

But it's not just about active lifestyles, it's streetwear culture, born on the streets but gone mainstream by way of Instagram, that has accelerated the growth of the sports footwear market. Indeed, research has shown that nearly three-quarters of the time, consumers are wearing sneakers, not for performance needs, but for everyday purposes - yes the ugly sneaker trend is equal parts fashionable and comfortable.

Speaking of fashion trends, there's nothing like a collaboration or limited edition sneaker to get the sneakerheads lining up. There's been a lot of talk recently surrounding the sneaker resale market - with some of the key players gaining unlikely investors and partners. The secondhand sneaker market is estimated to be worth more than $1 billion, fueled by consumer's thirst for limited editions of Jordan and Air Max sneakers.

With the growth of the rest of the footwear market showing stagnation, are major retailers who've traditionally had less athletic focus responding by adding more sneakers to their assortments? We dug into the data to find out what's happening in athletic footwear. 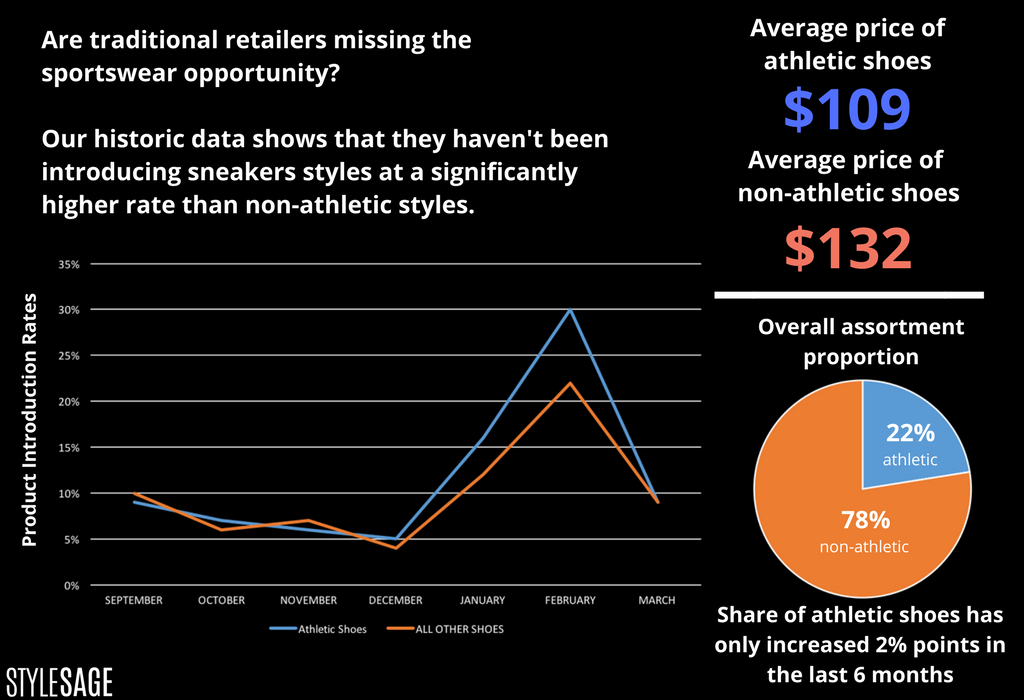 Our sample size included department stores and footwear-focused retailers, and our historic data analysis uncovered that non-athletic styles are still dominant. Moreover, there has only been a 2 percentage point increase in athletic shoe styles introduced over the last six months, and product introduction rates are very similar between athletic and non-categories. Perhaps retailers are looking at the average price point in their selection of footwear, as the average price point for non-athletic footwear is $23 higher than athletic shoes.

Could these retailers be missing out on the sneaker opportunity? The data would seem to indicate, that yes, they're not responding as swiftly as the market trends are moving.

Dig into the retail headlines with our Truth By Number series. Find them all right here.